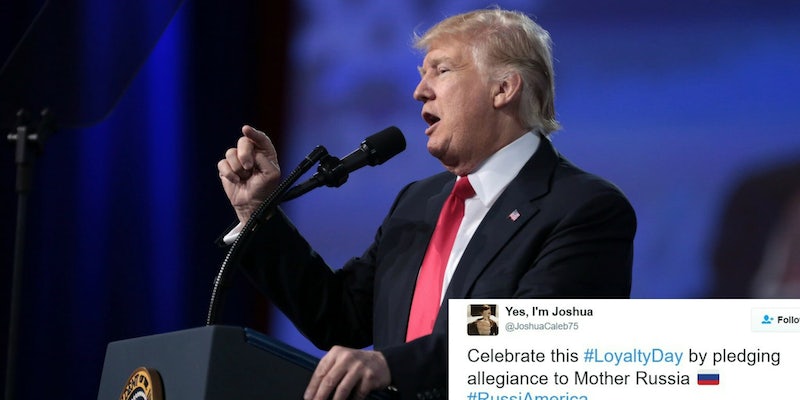 It's a day that's been around for six decades.

President Donald Trump has declared next Monday as Loyalty Day, writing in a presidential proclamation that it shall be a day that “we recognize and reaffirm our allegiance to the principles upon which our nation is built.”

Almost immediately, Twitter went to work on the concept of loyalty and what it means to Trump.

They said 'Loyalty Day' is to uphold 'the inherent dignity of every human being'-a few days after launching a hotline for 'removable aliens' https://t.co/UBtnKXfANI

*REALIZES IT COULD MEAN AN EXTRA DAY OFF*

How do we celebrate Loyalty Day? Marry a third wife?

But before those who oppose Trump get into too much of a huff, realize this: Loyalty Day has been around for six decades.

As the Nation points out, President Dwight D. Eisenhower was the first to declare a Loyalty Day, and it’s been celebrated by everybody from JFK to Ronald Reagan and from Nixon to Obama. As the Los Angeles Times wrote, it was first known as Americanization Day in 1921, and “it arose in response to the 1917 Bolshevik Revolution in Russia and growing radicalism in a swelling U.S. labor movement.”

It's been called Loyalty Day since Eisenhower. JFK, LBJ, Nixon, Ford, Carter, Reagan, Bush, Clinton, W, and Obama all signed off on it.

Tweeting it again bc it's starting to spread – Loyalty Day was also proclaimed by Obama. Gaining traction as Trump's bc it fits a narrative. https://t.co/ECfdtTblc1

But that doesn’t mean some people can’t see the irony of Trump celebrating the concept of loyalty.

Married 3 times, cheated on the first two, used to be a democrat…guys the irony is burning a huge hole in my face. https://t.co/7n95Ql1kfB