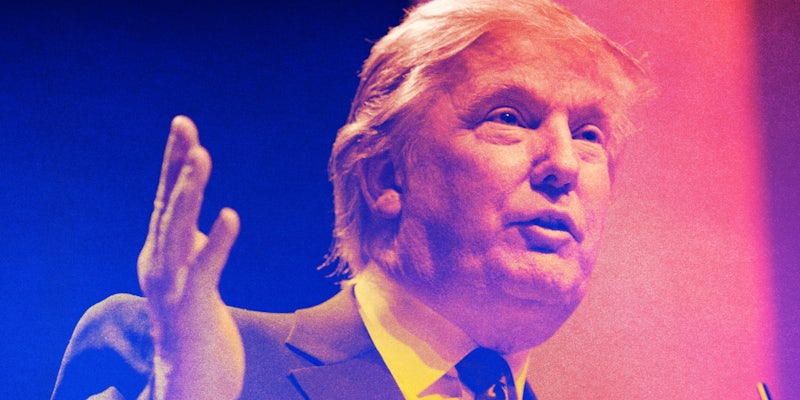 Donald Trump’s race problem is even worse than you think

The Latino vote isn't his only issue.

Donald Trump has to go above and beyond to be the standout racist among the 16 men running for the top spot in the GOP, and he’s doing so with his chin held high and his hair coiffed. It’s still too early to tell how the GOP primaries will pan out, but one thing remains clear: Trump will not bow out without a fight.

Minutes into his campaign announcement late June, the 69-year-old real estate tycoon-turned TV star unleashed his anti-Mexican fervor. “They’re bringing crime. They’re bringing drugs. They’re rapists,” he declared in his announcement. But some of them are good people, he assured Americans.

This was rightfully met with a major backlash, first from Univision, who announced they would no longer broadcast Trump’s Miss Universe and Miss USA pageants, which he’s owned since 1996. NBC followed suit, ending their “business relationship with Trump,” who hosted The Apprentice and Celebrity Apprentice. The network will continue airing the reality series—but without Trump in the executive office chair.

Since the backlash, Trump’s pushed harder, commenting further on the dangers of undocumented immigration and the “tremendous infectious disease” brought to the U.S. through the southern border; Trump even insulted John McCain’s war record for speaking out against him.

But somehow, the Trump campaign continues to thrive. Trump remains at the top of the polls, leading with 18 percent in the latest CNN/ORC poll, beating out Florida Gov. Jeb Bush (15 percent), Wisconsin Gov. Scott Walker (10 percent), and a slew of other fire and brimstone Republicans. (Ted Cruz, Marco Rubio, and Bobby Jindal are also hoping to secure a GOP nomination.) Whatever Trump says has resonated with the Republican base.

Despite this small lead, Trump may have already lost the nationwide Latino vote. According to a recent Univision poll, 70 percent of Latino voters find Trump “unfavorable,” while 80 percent found his comments on Mexicans offensive.

But racism is nothing new for the Donald Trump we’ve come to know and loathe. In fact, he has an extensive history of not only anti-Latino bigotry, but also anti-black racism, and it extends far beyond his rhetoric. The media is currently devoting a lot of time and ink to what Trump has said in terms of race, without taking a much-needed look at what he’s actually done to Latino and black communities throughout his career.

At the start of the backlash against Trump—which was brought on in part by Latino organizers, online petitions on MoveOn.org, and general noise on social media—the Washington Post broke the story about Latin American workers building the new Trump hotel at the Old Post Office Pavilion in Washington, D.C. Only a few blocks away from the White House, the construction crew included a few workers, some who were undocumented immigrants when they arrived in the U.S.

“Do you think that when we’re hanging out there from the eighth floor that we’re raping or selling drugs?” Ramon Alvarez, 48, a window worker from El Salvador, told the Post during a break Monday morning just outside the construction site. “We’re risking our lives and our health. A lot of the chemicals we deal with are toxic.”

Although the Trump Organization maintains they follow all hiring rules within the parameters of U.S. immigration laws, Trump has a storied history of hiring undocumented workers—and placing them under disparate working conditions.

In 1990, Trump faced charges from the early ‘80s that he employed nearly 200 undocumented Polish immigrants for the demolition of the Bonwit Teller building to make way for Trump Tower. The New York Times reported that “Mr. Trump, desperate to meet deadlines on a vast project whose intricate financing was partly dependent upon them, overlooked the use of undocumented Polish immigrants, who allegedly worked round-the-clock and even slept at the site.” Unpaid immigrants were allegedly threatened with deportation when they asked for their wages.

So while Trump, a man worth an estimated $3 billion, travels around the country making claim after claim about Mexican immigrants, he continually builds his properties with immigrant labor—the same immigrants he’s associating with drug dealers, rapists, and terrorists. But to acknowledge his use of immigrant labor, Trump would have to admit to the complexities of immigration in the U.S., something he’s been unable to do thus far.

For example, when asked how he would address the 11 million undocumented immigrants currently in the country, Trump responded, “We’re going to do something with that.” Then adding, “I’m planning on building a tremendously powerful and strong border.” Remarks like these do nothing to address the complex conversation about creating a sustainable pathway to citizenship for undocumented immigrants, nor does it address the broken detention system and how it destabilizes the affected families.

Nuance is not Trump’s strong suit in the world of politics—and as basic and reductive as his ideas are about Latino immigrants, he’s similarly daft and evasive when it comes to his history with black Americans.

Gawker recently published a collection of quotes by Trump on his feelings about “the blacks,” the term he commonly uses when referring to black people. “I have a great relationship with the blacks. I’ve always had a great relationship with the blacks,” Trump said in a radio interview in 2011, during his previous presidential run. As Seth Meyers retorted at that year’s White House Correspondents Dinner, the same week that President Obama released his long-form birth certificate after pressure from Trump and the Birther conspiracy movement, “Unless the Blacks are a family of white people, I bet he’s mistaken.”

The quotes in the Gawker piece sound bad out of context, but they are even worse when considering why Trump has felt the need to assert that he has a strong relationship with black Americans. In 1973, the young Donald Trump, who took over the Trump Management Corporation, faced a Department of Justice charge that accused the corporation of violating the 1968 Fair Housing Act with properties primarily in Brooklyn, Queens, and Staten Island.

Seeking an injunction to halt alleged discriminatory practices, the Government contended that Trump Management had refused to rent or negotiate rentals “because of race or color.” It also charged that the company had required different rental terms and conditions because of race and that it had misrepresented to blacks that apartments were not available.

According to Salon, Trump retaliated by “[countersuing] the government for making baseless charges against the company.” Apparently always one for seeking media attention, Trump gave a news conference about the suit, defending himself. “I have never, nor has anyone in our organization ever, to the best of my knowledge, discriminated or shown bias in renting our apartments.”

The Times reported that “local actions [had] been brought against the company, [Trump] said, but ‘we’ve won them all.’” He went on to accuse the government of trying to force him to rent to welfare recipients in middle-class units, a move he believed would cause massive white flight from the city.

As basic and reductive as his ideas are about Latino immigrants, he’s similarly daft and evasive when it comes to his history with black Americans.

Trump ultimately reached an agreement with the DOJ in 1975, but they would come back at him for the same violations in 1978. By 1983, at least two of his properties had 95 percent white occupancy.

If we’ve learned anything in the almost half-century that Donald Trump’s been a major player in American real estate and business, it’s that Trump does what Trump wants. He’s managed to find ways to continuously employ and exploit undocumented labor to build his high-rises. He persistently practiced racial housing discrimination.

And whether he’s going to win or not, Trump will continue to run with his own, personal brand of racism—because that’s the only way he knows how. Be loud, hateful, and controversial. Whatever keeps Trump’s name in the spotlight.