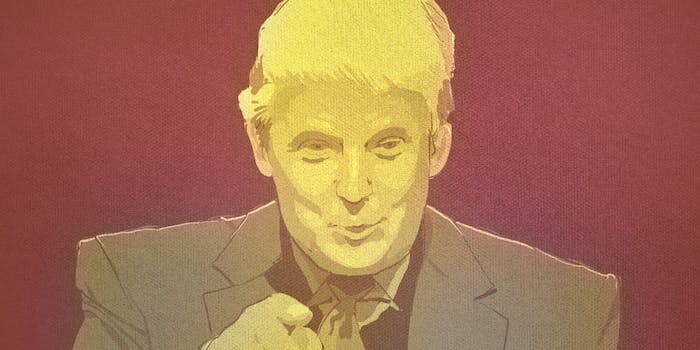 Reagan once claimed, “Hispanics are already Republican. They just don’t know it.”

It should come as no surprise that, when it comes to Donald Trump, Latino voters are likely to say, “You’re fired.” According to the most recent NBC News/Wall Street Journal poll, a staggering 75 percent of Latino voters view Trump unfavorably—which, in light of his repeatedly offensive comments about Mexican immigrants, is probably putting it lightly. The poll surveyed 250 Latino voters, as opposed to the Gravis poll taken in Nevada that put Trump at the top of the Latino vote at 31.4 percent, as only 35 Latino Republicans were surveyed.

Trump used the data from the latter poll to make the declaration that he would, in fact, win the Latino vote. “They just did a big poll in Nevada, the state of Nevada,” he said in a press conference late July, “I’m way ahead—and more importantly, as far as I’m concerned, I’m way way ahead with the Hispanics. Into the thirties.” As the new poll shows, Trump’s confidence in U.S. Latinos is misguided—but interestingly, some 13 percent of Latino voters in the poll still view Trump favorably.

In spite of Trump’s vitriolic anti-immigrant stance and his record of using undocumented labor, these 13 percent of Latino voters would still vote for him today if given the opportunity. Naturally, one would wonder exactly why any self-respecting Latino in America would buy what Trump is selling. However, their continued support powerfully speaks to the larger culture of assimilation and anti-immigrant sentiment among many U.S. Latinos.

In spite of Trump’s vitriolic anti-immigrant stance and his record of using undocumented labor, these 13 percent of Latino voters would still vote for him today if given the opportunity.

According to projections by the Census Bureau, Latinos will make up almost 30 percent of the U.S population by 2050. However, Slate’s Jamelle Bouie remains mindful of shifting identities within the Latino population. He writes, “Assimilation, intermarriage, and upward mobility might lead some Hispanics to identify as ‘white,’ even as they hold to their cultural heritage.” Over time, society may adapt to this identification, in which we “[treat] light-skinned, European Hispanics as ethnic white, akin to Italians and Eastern Europeans.”

Indeed, the story cites the Pew Research Center, who found that 1.2 million Americans who identified as “Hispanic, Latino, or Spanish origin” on the 2000 Census shifted their identification to “white” in 2010.

Shifting identities suggest a sense of detachment from cultural heritage, as many Latinos who identified as white are likely to be second- or third-generation Americans, not immigrants or their children. This means that a large swath of assimilated Latinos might not necessarily disagree with or take offense to the many inflammatory statements that Trump has made regarding Mexican immigrants.

“With his stance on border issues, I’m in total agreement,” Delilah Rodriguez, a Republican with Mexican heritage, told the Huffington Post at a Trump event in New Hampshire. She continued, “I feel that if anyone has the right intentions in entering our country, they’re not afraid to go through the right channels,” arguing that the border should be closed “for a while.”

The Facebook group Latinos/Hispanics for Donald Trump also cites the border as the reason for their support of the famously coiffed candidate. “The media is ignoring that many many voting Americans of Latino and Hispanic descent are conservatives and in fact support a strong border! [sic],” the page states in its about section.

The idea of an unassailable wall to deter immigration hearkens back to nearly 30 years ago when President Reagan signed into law the Immigration Reform and Control Act (IRCA) in 1986. This policy established tighter security at the Mexican border, as well as instituting tough penalties for companies that hired undocumented immigrants. Despite his stance on Mexican immigration, Reagan was surprisingly popular with Latino voters, nabbing 40 percent of the Latino vote during his reelection campaign, but this statistic failed to shock Reagan. “Hispanics are already Republican,” Reagan reportedly claimed. “They just don’t know it.”

1.2 million Americans who identified as “Hispanic, Latino, or Spanish origin” on the 2000 Census shifted their identification to “white” in 2010.

However, there’s one part of IRCA that conservatives who want to “make America great again” fail to remember. The wide-scale amnesty included in the legislation granted legal status to 2.7 million undocumented immigrants who entered the country prior to 1982. But according to Pew, immigration isn’t such a big issue for Latinos in the upcoming election—the economy and health care top the list.

If Fox News claimed that Latinos are “today’s Reagan Democrats,” the demographic that confoundingly shows little support for Trump is Cuban-Americans, who have historically voted Republican. After a surge in Cuban immigration in the 1960s, after the rise of the Castro regime, Florida’s Latino vote has been overwhelmingly Republican. For instance, Pew Research Center notes that George W. Bush won 78 percent of the Cuban vote in Florida in 2004. Despite that, Pew’s data suggests that Cuban-Americans are shifting left, and those who are still voting Republican this year may likely support Florida Gov. Jeb Bush or Sen. Marco Rubio, the latter being of Cuban descent.

Although Latinos are not a single-issue demographic, as Latinos encompass a wide range of nationalities and cultures, Trump’s message of scapegoating Mexican immigrants may be the only issue that resonates with those who still mysteriously support the candidate. But one thing’s for sure, if he wants to improve his chances of winning the Latino vote as he believes, Trump will have to back off pointing the finger at Mexico and offer some actual insight that will benefit the future “minority-majority.”