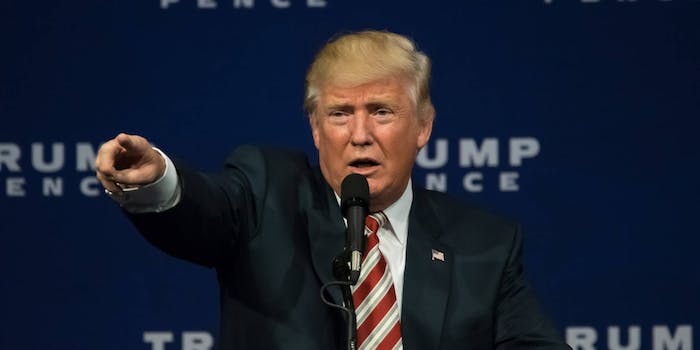 He may never recover from this old lady's burn.

Say a prayer tonight for the presidency of Donald Trump, for it ended today, four days before it was set to begin, when a knitting circle went in on him so hard.

It appeared nothing could take down Trump in his march to the presidency—not refusing to releases his taxes, not pussygate, not his feud with Khizr Khan—but it appears his ascendancy was not inexorable, for he has been felled today, by Elsie Hay Cook, who shared this photo to the Addicted to Knitting Facebook group.

fuck him up elsie pic.twitter.com/wx6Qdxdad1

Please enjoy these GIFs of NBA benches reacting to vicious dunks, for, to me, they accurately convey what Elsie just did to the president-elect.

GIF via The Big Lead

GIF via For The Win

Elsie will now be mentioned breathlessly along other historical figures, like FBI Deputy Director Mark Felt, who have single-handedly taken down entire presidencies.

The Addicted to Knitting Facebook page has nearly 40,000 members, and consists of “those of us that love to knit so much they have forgotten to eat!”