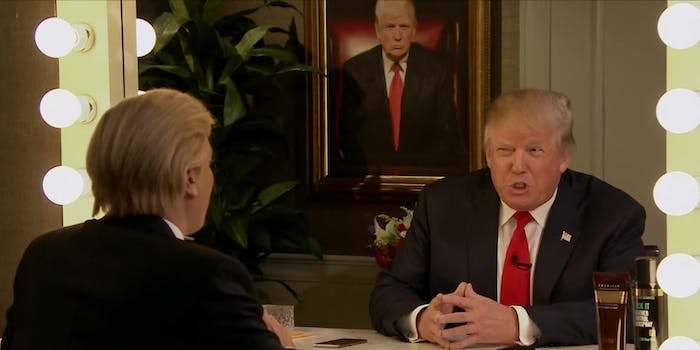 The primary season is going strong, and that can only mean one thing: Your favorite late night TV shows are going about the grueling task of playing host to the presidential hopefuls.

Although the candidates’ platforms and personas might differ, the pitfalls are very similar. While politicians are occasionally refreshingly candid on late night (like Vice President Joe Biden’s recent conversation with Stephen Colbert about grief), these segments are just as often bogged down by softball questions or viral bait. For instance, witness Jimmy Fallon’s recent Trump-off with the famously coiffed candidate, and even Colbert was stumped by Donald Trump.

What’s the point? And the bigger question: Would it be so bad if it all just went away?

If you’ve watched enough of these things, you know what a drag they can be, as politics and entertainment can be an uneasy mix. Take Jeb Bush’s interview on the inaugural episode of The Late Show with Stephen Colbert, for example. The former Florida governor appeared on guard from the start, which is understandable: Colbert roasted his fair share of politicos in his Comedy Central days. But it was plainly obvious that this was not going to go well for anyone—especially the viewer at home.

These segments are just as often bogged down by softball questions or viral bait.

When Colbert asked the candidate to identify an area where he and his brother—former president George W. Bush—disagreed, Bush first attempted a joke about which of the two was more attractive. But when pressed on the issue, Jeb said that his brother’s failure to reign in the Republican-led House’s spending was a key difference between them, which felt like more than a dodge. Considering the trouble Jeb Bush has encountered by repeatedly failing to state a clear, coherent single position on the Iraq War—one that was arguably the Bush administration’s most controversial legacy—the audience deserved a less evasive answer to Colbert’s challenge.

It was practically tee’d up for Bush, who played it safe and didn’t swing. And on any talk show that’s based on comedy—the audience laughter that fills the void of the stage—there’s an implicit limit on just how far the host is going to push.

But not all candidates get the same treatment. When Sen. Bernie Sanders (I-Vt.) appeared on Colbert’s show weeks later, he didn’t get quite the free ride Bush did. Colbert adversarially peppered Sanders with questions—sometimes slipping into a familiar, self-important, mock-conservative tone that sounded tantalizingly familiar to longtime fans—and tried to get him to state what income tax rate he’d like to see. But like Jeb Bush and other late night guests, Sanders didn’t directly answer the question—although he did manage to make it into a chance to stump for income equality.

But the problem with late night interviews isn’t just that they’re unfunny or riddled with deliberate vagueness. For politicians, talk shows can also be a platform for dangerous misinformation. This is what happened during Sen. Ted Cruz’s (R-Texas) pre-campaign appearance on NBC’s Late Night with Seth Meyers back in March—which many hailed as Meyers calling out climate change denial. Turning Cruz’s anti-Obama “world on fire” rhetoric around on him, Meyers reminded Cruz that it’s the “hottest year on record.” He quipped, “I think the world’s on fire, literally.”

It was a good jab—and well-delivered—but that didn’t negate what happened next: Cruz proceeded to describe in detail why he doubted the staggering scientific consensus on climate change, arguing that the 17 years of satellite data have shown “zero warming.” This is a dubious claim, with Cruz promoting a narrow, misleading set of satellite data above all the other ways of tracking climate change, which have shown a conclusive, demonstrable increase in global temperature over the last several decades.

It was plainly obvious that this was not going to go well for anyone—especially the viewer at home.

In short, Meyers was right. But he might not have had the time, inclination, or specific knowledge of Cruz’s particular brand of denialism to effectively counter it. Cruz may have been the butt of a joke but he got the last laugh, lecturing Meyers’ audience on how Big Climate is lying to you about global warming—with just enough science-y sounding claims to sound like he knows what he’s talking about.

It’s the exact same reason that an early episode of Comedy Central’s The Nightly Show failed so hard with a panel on vaccines. Larry Wilmore’s three “voice of reason” panelists were two comedians and CBS News’ Dr. Holly Phillips, all of whom were unable to take on the panel’s lone autism ruther, Zooey O’Toole of Thinking Moms’ Revolution. On their website, the group describes themselves as not as an anti-vaccination group but as “a tight-knit group of parents… drawn to support each other.”

Inlander’s Daniel Walters argues that, thus, when it came to taking on O’Toole, it was always going to be a tall order for Wilmore’s panel. “For many viewers, a skeptical mom who deeply loves her son carries more weight than a thousand peer-reviewed studies,” Walters writes. But when it came to debunking misinformation on the subject, “nobody on the panel, not the least Wilmore, was the slightest bit prepared for the responsibility.” And this only made her false claims seem more credible and compelling.

Part of this has to do with the changing nature of the presidency in the Obama era, as the president has set the gold standard for charming-yet-on-message late night interviews. In a piece for the U.K.’s Telegraph, Peter Foster argued that politicians need to be able to appeal to the viewing public in order to have a shot at the White House. In the case of Gov. Scott Walker (R-Wisc.), Foster writes, “He is balding and—even his supporters would concede—a little bit boring. While his anti-celebrity been “part of the attractiveness“ of his campaign, Walker recently dropped out of the race.

But in between slow jamming the news and doing Letterman, Obama himself has struggled with the lines of infotainment. Barack Obama’s deeply offensive “Special Olympics” joke on The Tonight Show with Jay Leno in 2009 still ranks as one of the worst gaffes of his presidency, all because he was trying to play the late night game.

Cruz may have been the butt of a joke but he got the last laugh.

While blurring the lines of entertainment and politics has been a great decision for Obama’s personal brand and has helped long-shot presidential candidates like Gov. John Kasich (R-Ohio) and former Maryland governor Martin O’Malley reach a wider audience, it’s not a great precedent for our political system. Talk shows might occasionally strike viral gold, but it too seldom helps the public become more informed or educated about who we’re voting for—or what they stand for.

We’re all reminded of this every time we watch some wooden, disengaged candidate dodging softball questions on a Wednesday night, and we’d all be better off if candidates found something else to do with their time.