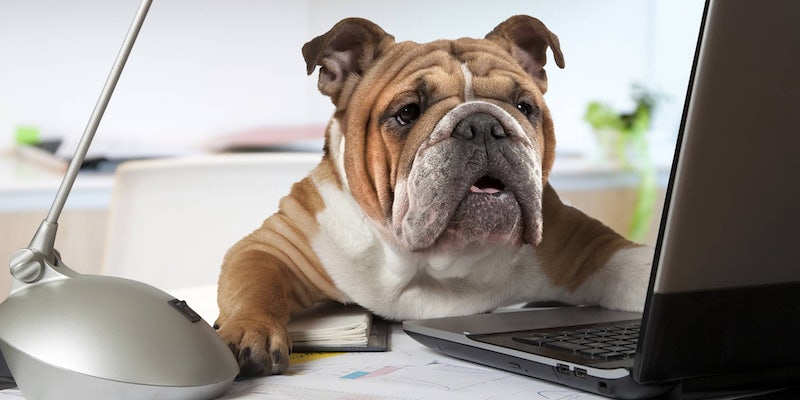 There are a lot of big, weighty issues facing the American electorate this year, including equality, diplomacy, national security, and more. But, with the general election season just now getting underway, there’s another issue that’s sure to be on the minds of likely voters everywhere: Does Donald Trump even know what a dog is?

Anybody familiar with the Donald’s bizarre, often inflammatory persona on Twitter might be familiar with this particular fascination of his. Namely, that he loves comparing people to dogs—a reliable staple in his rotation of juvenile, brusque insults.

It doesn’t even matter if it makes a damn bit of sense, either. As long as there’s somebody (or something) Trump doesn’t like, he can and will compare them to a dog. In particular, he has a strange fascination with people being “fired like a dog.”

.@DavidGregory got thrown off of TV by NBC, fired like a dog! Now he is on @CNN being nasty to me. Not nice!

.@EWErickson got fired like a dog from RedState
and now he is the one leading opposition against me.

Wow was Ted Cruz disloyal to his very capable director of communication. He used him as a scape goat-fired like a dog! Ted panicked.

.@GlennBeck got fired like a dog by #Fox. The Blaze is failing and he wanted to have me on his show. I said no – because he is irrelevant.

I hear that sleepy eyes @chucktodd will be fired like a dog from ratings starved Meet The Press? I can't imagine what is taking so long!

Notably, with the possible exception of underperforming guide dogs, film or TV dogs, or dogs of war, our canine friends are basically impervious to the fears of employment termination that loom over the rest of us. To put it another way: you can’t fire a dog. And, even if you could, what does it mean to claim that a human being was fired like a dog? Get fired, flash some irresistibly adorable sad eyes, and start barking at the mail truck, maybe. Perhaps pee on the floor.

That’s not the end of Trump’s apparent confusion about our canine companions, either. He’s also fond of accusing former GOP presidential nominee Mitt Romney of “choking” like a dog in 2012, because dogs constantly crumble under pressure and have poor gag reflexes or something.

Mitt Romney had his chance to beat a failed president but he choked like a dog. Now he calls me racist-but I am least racist person there is

Did you know that dogs can beg for money, too? It’s true! And they do it in such a distinct way that you’d never mistake it for, you know, human begging. Trump clearly didn’t take too kindly to being criticized by Brent Bozell when he tweeted this kernel of wisdom insinuating that the conservative writer had become some type of canine spanger:

.@BrentBozell, one of the National Review lightweights, came to my office begging for money like a dog. Why doesn't he say that?

Back in January, Trump insisted that the New Hampshire Union Leader had been kicked out of the ABC News GOP primary debate?you guessed it?“like a dog.” This has a little more logic behind it, at least, since plenty of sad doggies know the feeling of being kicked out of the house for the night.

Union Leader refuses to comment as to why they were kicked out of the ABC News debate like a dog. For starters, try getting a new publisher!

Sometimes people don’t even get the decency of being compared to a dog, and are instead labeled dogs themselves. That’s how Trump went after former Obama campaign strategist David Axelrod, who despite once having a very impressive moustache, is nowhere near shaggy enough to be mistaken for a St. Bernard.

Watched @davidaxelrod on @oreillyfactor and the dog hit me even after I made a big contribution to his charity. I never went bankrupt!

He doesn’t seem to have a very positive opinion of dog-catchers either, although it’s a more time-honored political turn-of-phrase than his other dog-centric attacks. Still, when taken in context, anti-dog bias may as well be added to the list of pressing concerns about a potential Trump presidency.

.@GovernorPataki couldn’t be elected dog catcher if he ran again—so he didn’t!

And of course, it wouldn’t be a proper list of Trump insults if there wasn’t at least one overtly sexist example on offer. Back in 2011, columnist Gail Collins described the following experience in The New York Times:

“He is extremely sensitive to any gibes about his business record, which has been up and down over the years. During one down period, I referred to him in print as a “financially embattled thousandaire” and he sent me a copy of the column with my picture circled and ‘The Face of a Dog!’ written over it.”

Collins quite obviously has the face of a human, adult woman.

What gives, Donald? Is it not fair to wonder if he’s ever been in the presence of an actual dog before? They’re really quite lovely animals. If he’d only get to know one, maybe he’d stop using their very inherent doggishness as a reflexive insult. But then he’d have to come up with a new one, and “fired like a cat” doesn’t have quite the same punch to it.