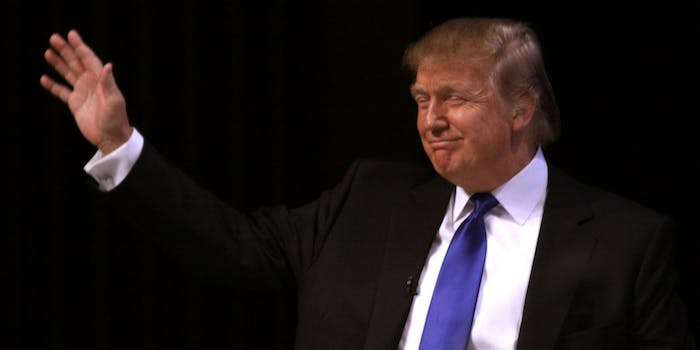 Rumor has it, Trump was born gripping a subpeona in his little hands.

The websites had the word “parody” laid out in a giant banner at the top of the page, as well as a prominent warning reading “The content and this website has NOT been approved by Donald Trump, or by the Trump Organization, or by the shows The Apprentice/The Celebrity Apprentice.”

The settlement, which comes after Trump sought $400,000 in damages, followed a March 2013 lawsuit for “federal cybersquatting,” a crime defined as as “the registration as domain names of well-known trademarks by non-trademark holders who then try to sell the names back to the trademark owners.”

There appears to be no evidence that Yung tried to sell the Trump domains he began developing in 2007. Trump did try to buy the domains for $100 in 2011. Yung refused and filed a complaint to keep the domains, citing his First Amendment rights.

Trump’s legal team told CNN the decision should serve as a deterrent against “anyone else who thinks they can register names that include Trump’s trademark and name and use them for commercial purposes.”