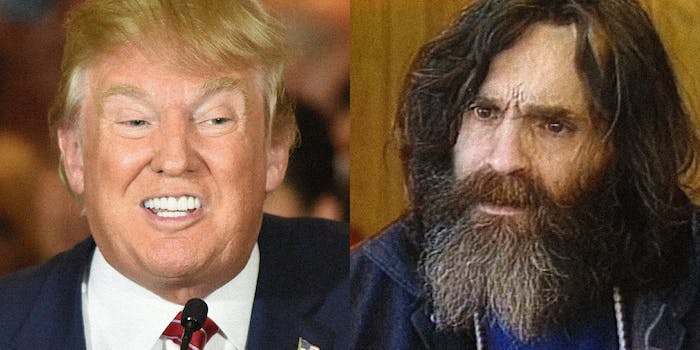 This is just weird...or it's perfectly normal.

Even without including it in your Twitter bio, we all know that retweets do not equal endorsements.

So we can’t necessarily prescribe any higher meaning to this, but it sure is leaving us scratching our heads. This morning, President Donald Trump retweeted conservative pundit Laura Ingraham’s hot-take tweet on a New York Times story about how Charles Manson was a “harbinger” of the “far right” movement.

Charles Manson wasn't the inevitable outgrowth of the Sixties. If anything, he was a harbinger of today's far right. https://t.co/k64W9lay6l

Manson was obsessed with the idea of a race war, and his infamous killing spree was an attempt to kickstart one. The article says that in this day and age, “[Manson’s] sort of logic is all too familiar to us. The paranoid, racist and apocalyptic ramblings of Mr. Manson are the DNA of the reactionary alt-right.”

The article goes on to state that the leading vanguard of the “alt-right,” the conservative movement that harbors white supremacists, have similar obsessions about clashes.

“In recent months, the far-right media have become fixated on the idea that left-wing “antifa” activists will spark a new civil war. Gateway Pundit, a far-right website, claimed that “millions of antifa supersoldiers will behead white parents,” and Alex Jones, the conspiracy enthusiast who runs the website Infowars, predicted that the antifa activists would lose such a war.”

To which, Ingraham tweeted this.

“Far right”? You mean “right so far,” as in @realDonaldTrump has been right so far abt how to kick the economy into high gear. https://t.co/VlTRcUkBv8

Is she saying that Manson’s ideas of a race war are “right so far?” Probably not, but why would one make that point? Because to read it in her edited version, it says something akin to “Charles Manson wasn’t the inevitable outgrowth of the Sixties. If anything, he was a harbinger of today’s right-so-far [movement],” which even if you think doesn’t endorse his ideas, still ties the far right to Charles Manson. Maybe not something you want? The guy with the swastika carved on his forehead as a symbol of you being right?

Either way, the president retweeted it.

So… is the president saying his ideas and backing all stem from Charles Manson?

Probably not, but like, as with everything in 2017, it begs one question: What the fuck?