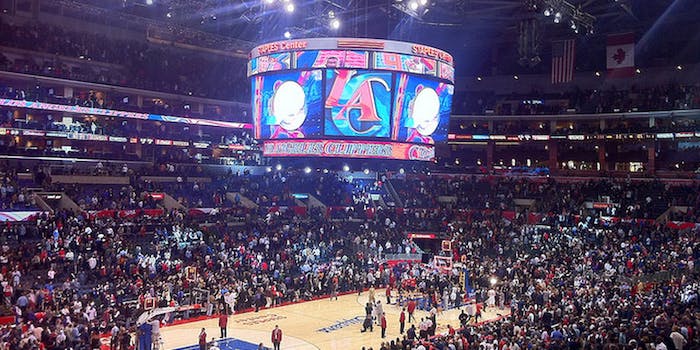 L.A. Clippers owner Donald Sterling was allegedly caught on tape telling his girlfriend, V. Stiviano, that she shouldn’t be taking pictures “with minorities,” and that it bothers him that she’s “associating with black people.”

In a nine-and-a-half-minute audio recording from April 9, obtained by TMZ, the 80-year-old Sterling can be heard telling Stiviano, who is Mexican and black, that she shouldn’t be “broadcasting” her associations with black people to the world. Stiviano recently posted an Instagram photo with NBA legend Magic Johnson, someone she says in the recording that she’s always admired. He takes her to task for publicizing her life, because it makes him look bad.

When Stiviano asks Sterling if she’s supposed to hate black people, he responds, “I don’t want you to have to hate. …I want you to love them — privately.” He also asks her not to bring black people to “his” games, and that includes Magic Johnson. There’s still no confirmation of who leaked the recording; a league spokesman said the NBA is “in the process of conducting a full investigation into the audio recording obtained by TMZ.”

This certainly isn’t Sterling’s first racist comment. In the past, he’s been sued twice for allegedly refusing to rent apartments to blacks and Latinos. Deadspin collected a whole list of racist statements attributed to Sterling. In 2009, former Clippers general manager Elgin Baylor brought a discrimination lawsuit against Sterling and club president Andy Roeser. He was allegedly quoted as saying Sterling envisioned a “Southern plantation-type structure” for the team, in which white men coached “poor black kids.”

The Clippers are currently in the playoffs, and there have been calls on Twitter and by Keith Olbermann for the team to boycott the playoffs. Magic Johnson told TMZ, “It’s a shame that Donald Sterling feels that way about African-Americans.” Snoop Dogg had some especially warm words for him, too.

Photo via David Jones/Flickr (CC BY 2.0)