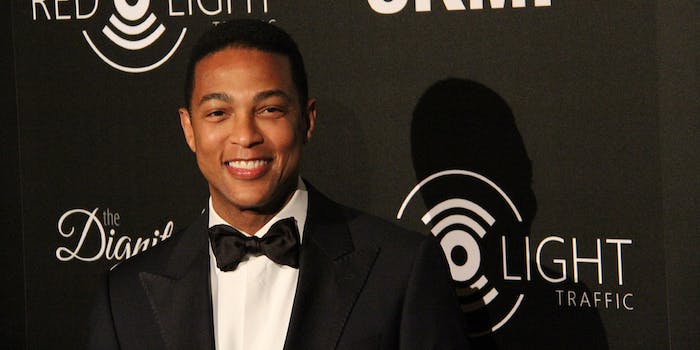 Don Lemon wanted to know what Bill Cosby's alleged victims could have done to stop him. Here's some better questions.

As allegations that Bill Cosby raped 15 different women continue to ripple through the Internet and the entertainment world—spurred, perhaps, by the fact that a man finally signal-boosted them—controversial CNN news anchor Don Lemon wants to know: Why didn’t accuser Joan Tarshis simply bite Cosby’s penis to avoid being coerced into giving him oral sex?

This, apparently, was the question on Lemon’s mind as he listened to Tarshis’s story.

Lemon later apologized, stating that he “never want[ed] to suggest that any victim could have prevented a rape.” While this is notable, unfortunately, that’s exactly what was suggested.

While Lemon’s question, which he claimed that he “had to ask,” stands out in its graphic inappropriateness, it’s a common practice to ask survivors of sexual assault why they didn’t “just” this or “simply” that. Whether it comes from prurient interest or supposed concern, many people who try to discuss sexual assault with survivors get caught up in the details of what the survivor could have theoretically, in a perfect universe, if they had thought of it in time rather than experiencing (as many victims do) too much fear or shock, done to prevent the assault.

First of all, it is not the responsibility of people targeted by sexual assault to prevent said assault. The fact that this still needs to be repeated, over and over, is disgraceful.

Second, there are many more survivors than there are rapists, and rapists get away with it because they are rarely held responsible for their actions.

Throughout history, the responsibility for preventing sexual assault has been placed on the shoulders of its potential victims. People like Don Lemon have probably been giving women these “tips” for millennia. Yet it hasn’t seemed to do any good. Isn’t it about time to try something else?

Maybe Lemon should be giving us some tips on how to hold powerful men accountable instead. Here’s a start.

In general, people seem to be pretty bad at thinking of social dynamics in terms of power. Many have trouble understanding the fact that white people and men have excess power in our society, for instance.

So do celebrities of any gender, and male celebrities especially. People who are so widely and strongly admired and valued wield a tremendous amount of influence without even intending to. When they do intend to, it gets even stronger.

This is especially true when a celebrity has something a non-celebrity wants—like fame, access, and opportunities. Many (if not all) of the women who have accused Bill Cosby of rape were young aspiring entertainers to whom Cosby offered mentorship. When people dismiss their allegations because some of them took a long time to come forward, ask yourself—what would it take to get you to destroy what might be your only shot at the career you want? Would accusing a famous, beloved man of sexual assault—and probably being dismissed, harassed, or even threatened as a result—really seem worthwhile?

In her chilling piece for the Washington Post, Barbara Bowman, another of Cosby’s accusers, asks why it took so long for her story to finally be believed. She brings up the fact that many of the people who worked with and for Cosby must have either been willfully ignorant about his violent behavior or actively aiding it. She writes:

For Cosby to commit these assaults against multiple victims over several years, there had to be a network of willfully blind wallflowers at best, or people willing to aid him in committing these sexual crimes at worst. As I told the Daily Mail, when I was a teenager, his assistants transported me to hotels and events to meet him. When I blacked out at Cosby’s home, there were several staffers with us. My agent, who introduced me to Cosby, had me take a pregnancy test when I returned from my last trip with him. Talent agents, hotel staff, personal assistants and others who knowingly made arrangements for Cosby’s criminal acts or overlooked them should be held equally accountable.

I am reminded of another story of sexual assault: Steubenville. After two high school football players raped a teenage girl at a party and their friends took and shared photos and videos, the head coach of the football team allegedly helped cover up the assault. And another story: Penn State. After former coaching assistant Jerry Sandusky sexually abused ten boys, a former university vice president, Gary Schultz, knew about it and did not report it, resulting in criminal charges.

I could find dozens more such stories. Powerful men are surrounded by other men who keep them “safe” from the inconvenience of a sexual assault accusation. This needs to stop if we ever want sexual assault to stop.

3) Men: speak less to women and more to other men.

Let’s be real: Men’s “advice” to women about sexual assault prevention has historically not been useful. (While they don’t typically advise fellow men about not getting raped, perhaps because they prefer to pretend that doesn’t happen, I doubt that advice would be any more useful.) Most of it requires either comic book-esque feats of physical strength or dexterity, or completely restricting our lives and never appearing outdoors without a trusted male escort. Never drinking, never partying, never walking alone (especially not at night), never flirting, never going on dates.

Some men (not all men!) get a little indignant at this and insist that “you can’t just tell rapists not to rape.” That’s correct, you can’t. You can, however, signal to them that you are the sort of man who won’t stand by and allow rape to happen around you. You can say, “Leave her alone, she’s had too much to drink and she’s not interested,” and they’ll know that if you see them leading her away and the police question you later, you’ll tell the truth. You can say, “Only ‘yes’ means yes,” and their conviction that pestering and coercing women is “just what guys do” will start to fade, because here’s another bit of evidence that it’s not, in fact, what all guys do. You can say, “I didn’t invite him to the party because he raped someone,” and they’ll start to realize that rape can actually have negative social consequences for them.

(Disclaimer: Do not rape because it’s abhorrent and wrong, not because it will put a dent in your social calendar.)

Supporting survivors does not look like this: “Why didn’t you just _____?” “Are you sure that really happened?” “But he’s such a nice guy.” “Come on, you know you wanted her.” “You should’ve _____.” “Well, that was wrong but you shouldn’t ruin their whole life over it.” “I’m not going to take sides on this.” “Well, innocent until proven guilty.”

Supporting survivors looks like this: “I’m sorry this happened to you.” “You didn’t deserve this.” “It wasn’t your fault.” “I want to live to see a world where nobody ever has to go through this.”

Supporting survivors is important not just because it is the only ethically acceptable way to treat them. It’s also important because the more supported survivors feel, the more of them will be able to come forward, sooner.

This may seem like a lot more work than telling women to bite rapists’ penises (or never go outside, or learn to shoot guns, or whatever), but it’s going to work much better. Trying to get women to individually avoid rape is like that joke about being chased by a bear and running faster than your friend. It’s neither a just nor a rational way to prevent violence.