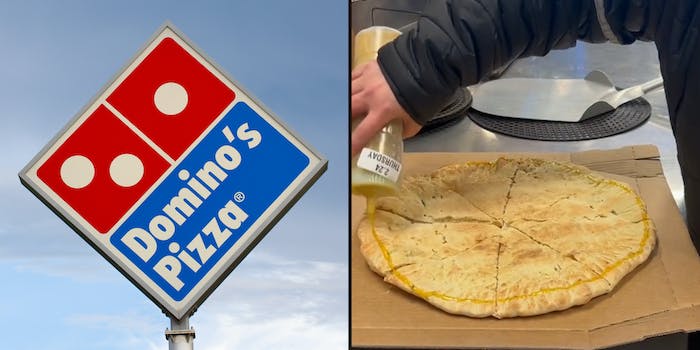 They ordered a 'Hawaiian minus everything' for $33.

The worker, known as Beth D (@beth_dutton) on TikTok, is seen laughing in the video as she prepared the order. The pizza was devoid of toppings, although Beth did add a ring of garlic sauce around its edges before cutting it.

“Some times you get strange orders at dominos,” Beth wrote in the video’s caption. As of March 27, the video received about 4.4 million views.

The unusual pizza order prompted nearly 1,100 comments from viewers. Several commenters referenced “None Pizza with Left Beef,” an infamous meme that was born when the owner of a blog called The Sneeze ordered a pizza with no sauce, no cheese and no toppings except for beef on the left half.

“where’s the left beef?” one viewer commented on the video referencing the meme.

“I thought it was gonna be none pizza left beef,” another viewer commented.

“not gonna lie… that still looks good,” one TikToker wrote. In response to the comment, Beth wrote, “It would be just like a giant breadstick.”

Other viewers said the customer may have ordered the plain pizza so they could top it themselves or because they have allergies.

“some people like to use their own sauce and toppings but prefer a better crust,” one TikToker said.

Another TikToker commented, “I have def ordered this. So many food allergies, aversions and lifestyles in my house.”

In a comment on the video, Beth explained that the pizza was ordered as a “Hawaiian minus everything,” making it a $33 pie. She also wrote that she tried calling the customer to confirm the order before making it, but they didn’t respond.

The Daily Dot reached out to the creator via TikTok comment and Domino’s via press email.