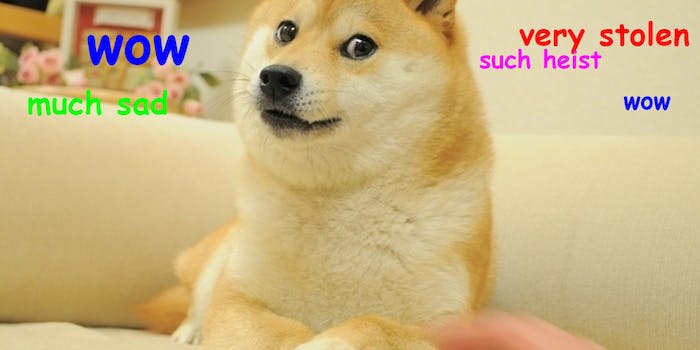 If you thought investing in a joke virtual currency based on a dog meme was a foolproof scheme, here’s some shocking news.

If you thought investing in a joke virtual currency based on a dog meme was a foolproof scheme, here’s some shocking news: Hackers stole an estimated 30 million dogecoins on Christmas.

That amount has a substantial real-world value, though it’s hard to say exactly how much, especially considering cryptocurrencies tend to crash after big hacks. TheNextWeb put the figure at $12,800; BuzzFeed estimated anywhere between $10,000 and $20,000.

Dogecoin, for the uninitiated, is only a few months old, and resembles a new counterpart to Bitcoin—one that adopts the language of the great-but-already-dead doge meme. Both are “mined” by computer users dedicated to solving an algorithm. Users of both strive for their currencies to be accepted more in the real world, though Bitcoin, created in 2009, has weathered far more growing pains, and has a much greater real-world value.

The main attack came on Dogewallet, a site for users to store their mined Dogecoins. But the hackers also hit Instadoge.net, and left the site defaced with the message “that makes 30m + 500k,” presumably meaning they took 500,000 more dogecoins.

Dogewallet’s owners have temporarily shut down the site, and frantically issued damage control on Reddit.