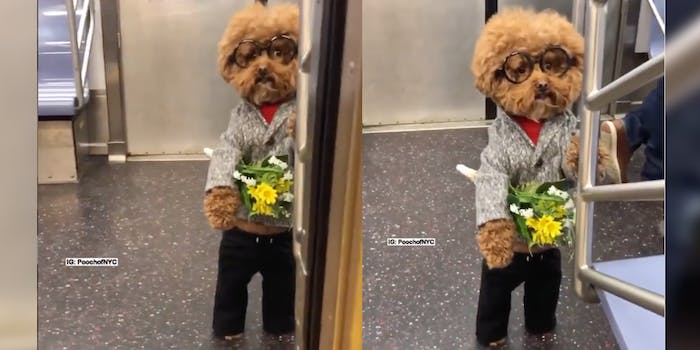 Some are calling it animal abuse.

A video of a dog dressed up in glasses and a blazer while standing on the subway like a human has gone viral—drawing slurry of mixed reactions from viewers.

The video, originally taken by the owner of the Instagram account @poochofnyc, was reposted by the popular dog account @DumbForDogs on TikTok. The video has more than 650,000 views on the app.

In the video, the dog, whose name is Agador and very much looks like the dog version of Bob Ross, is holding on to a rail while riding the subway. He’s also dressed up in a man’s fall outfit and is carrying a tiny bouquet of flowers.

While plenty of people on Agador’s Instagram page fawn over how cute he looks all dressed up, many people in the TikTok comments are saying that making the dog stand on his hind legs is unnatural, with some alleging that it is animal abuse to make him do so.

“This is awful!!! My heart breaks for this dog. He is a dog. Not human. Dogs are unconditional love. This owner should go to jail for abuse,” one comment reads.

“I really don’t understand how people think this is ‘cute’ I just see pain and cruelty,” another reads.

The account that reposted the video responded to a commenter who said they’d seen people beat their dogs to get them to stand up in a human-like way.

“But the dog isn’t standing, it’s posing, as you can see the dog needs support to do it it’s not doing it on its own,” @DumbForDogs responded.

Looking back on @poochofnyc’s Instagram, you’ll see that when Agador is standing, he has his hand perched on a wall, stoop, or something of the sort.

It is unclear how Agador’s owner gets him to stand up in that way.

The video is reminiscent of a situation back in 2017 when a dog owner in China faced similar backlash. But in those videos, the dog is fully walking on its hind legs rather than standing with a paw of support.

After people accused the owner of beating the dog to get it to walk like a human, the owner posted videos showing that “he teaches Smol Bean to move her front legs up and down while sitting by guiding her with his hands, and then feeding her a treat afterwards,” BuzzFeed News reported at the time.

Around this time, PETA posted a blog about the situation that said, “Please realize that this dog could have been abused for these fleeting moments of entertainment.”