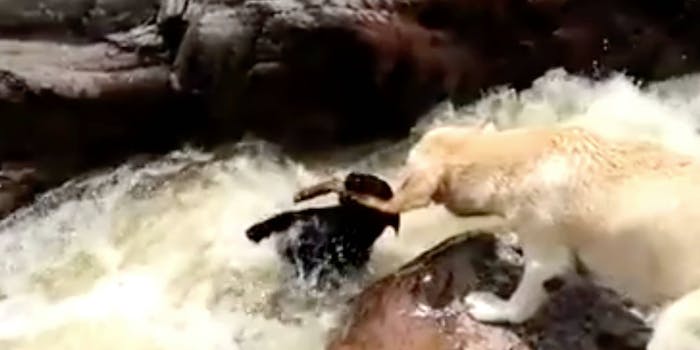 There are two ways of viewing this incredible footage of a dog pulling another dog out of the water that’s going viral on Facebook—and the one you choose is going to tell you a lot about the way you view the world.

The first is the stuff of Hallmark movies: a yellow labrador, sensing his buddy is in immediate danger as it tumbles backward down some rapids, makes a heroic rescue by pulling the pup up by the only thing it can grab: a stick. It’s an act of rare compassion. The dog is a hero, the sort that’s so sorely missing in times like these. Everyone needs to see this video.

The alternative, of course, is a glass considerably half-empty: The black dog was in no immediate danger. The owner has clearly played fetch close to this chute before, and the only thing on that labrador’s mind was the stick. This wasn’t selfless. It was selfish—the unintentional consequence of one’s blind devotion to a singular object. Please stop sharing this nonsense on Facebook in a desperate attempt to escape the boredom of your meaningless existence.