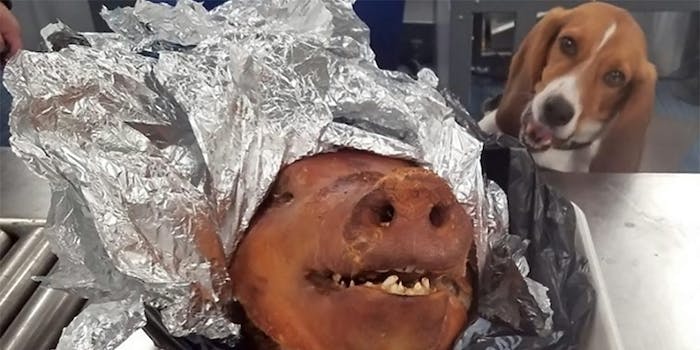 A very good dog named Hardy found a roasted pig head someone was attempting to bring into the United States via the Atlanta airport on Thursday. Atlanta’s Fox 5 reported that Hardy, who is a member of the “Beagle Brigade” at the airport, was able to sniff out the contraband in luggage belonging to a passenger from Ecuador.

“Our best defense against destructive pests and animal diseases is to prevent the entry of prohibited agriculture products from entering the United States,” Carey Davis, CBP area port director for the port of Atlanta, told Fox 5. “This seizure at ATL illustrates the tremendous expertise of our four-legged K-9 partners in protecting the United States.”

Someone snapped a picture of Hardy with his find, and we’re betting it’s more than pride in a job well done that’s putting such a big smile on his face.

Twitter has fallen in love with the good doggo and his very excited expression.

the look on this dog's face seriously makes this one of the better stories of the year. you've done good beagle https://t.co/EQyr3WxqlJ

That dog will be visiting the evidence locker later. “Hey officer McBark.” “Hi Dave, just signing out some evidence for a uh, case I’m working on *nervously wags tail*”

Obviously not in favor of cops seizing your stash and using it themselves but would be ok with a one time reprieve here https://t.co/TETwQAVhky

Although it would be nice to think that Hardy was rewarded with some pig head for lunch that day, duea to risk of infection, the contraband was destroyed after being photographed. We’re sure he was at least given a nice treat and several pats on the head.