This dog-naming Kickstarter is so stupid, it’s actually brilliant

Aaron Schlechter is a man with a plan.

The project is entitled “I WILL NAME YOUR DOG,” and Schlechter has drawn a simple diagram to explain exactly what will happen if you throw your support behind it:

You’re probably thinking to yourself: “Can’t Aaron name dogs for free?” or “Wait, what? Why?” But Aaron Schlechter does not want you to ask questions like that. He wants you to ask him questions like “What should I name my dog?” Here’s how he explains his mission:

Once, when I was a kid, I put my shoes on the wrong feet. My father, when he noticed what I’d done, was very upset about it. “People are going to judge you and think you’re an imbecile if you can’t put your shoes on the right feet,” was the gist of what he screamed at me. It was an important lesson. Just avoiding improper footwear usage won’t keep you safe from the harsh judgement of others though. It’s likely that people are judging you right now. Why? Probably because of how unbelievably inept you are at naming dogs. How many times have you met a person that you were sexually attracted to that was walking a dog that you were attracted to (not in a sexual way) and asked them their dog’s name only to be repulsed by their horrible taste in dog names? Dozens of times I’m sure. Don’t be that person. 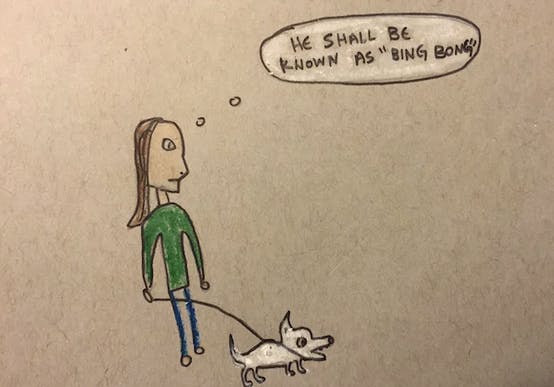 Now, if you’re judging this Kickstarter campaign on its merits as a dog-naming project, you’d have to say that its quality is somewhat diluted by a lack of focus. Let’s take a look at some of the reward levels here:

First two rewards make sense. Regardless of how you feel about the validity of the project as a whole, those two rewards represent two different levels of dog naming. After that, things go completely off the rails. Cats? Fish? Body parts? Humans? What is going on here? I thought this was a dog-naming Kickstarter, Aaron. I thought I was supporting the dreams of a wannabe dog-namer.

Qualms about the breadth of the undertaking aside, this Kickstarter certainly is a Kickstarter. Schlechter, who categorized this project as “art”—because “what is art, man?”—is attempting to raise $3,700 to complete his project. Why $3,700? We’ve reached out to Schlechter for comment on this seemingly arbitrary figure, and will update if and when we receive a response. But he’s probably busy coming up with names for dogs.

Update 9:19am CT, April 23: Schlechter lately reached out to the Daily Dot about his slightly amended goals for his project:

Kickstarter has informed me that they will take down my project unless I focus on the book aspect book aspect of the project, “rather than naming dogs, which—while a noble goal—does not fit within one of our 15 categories.”

I have raised my goal a bit and hope to raise 1.2 billion dollars, with which I plan to buy Kickstarter and change its rules so that the only projects allowed on the site will be related to naming dogs.

That may seem like a stretch, but think about it—if only one out of every six people on earth donates a dollar so I can name their dog “Donald” we’re in business.

Thank you in advance for your support.

Keep reaching for the stars, my man.

Photo via Jonathan Kriz/Flickr (CC BY 2.0)