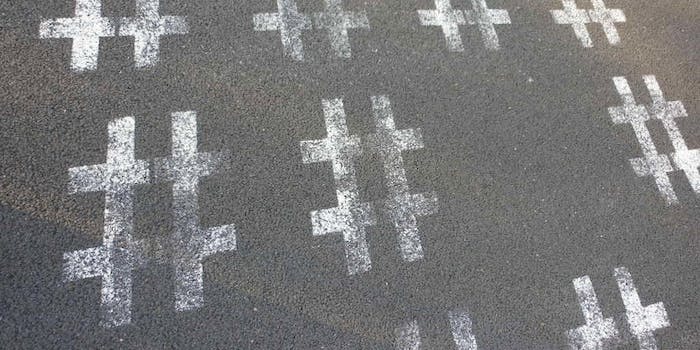 Photo via Michael Coghlan/Flickr (CC BY 2.0)

There was an interesting debate at the University of Pennsylvania this week. The Foundation for Individual Rights in Education, or FIRE, hosted a panel discussion on the effectiveness of hashtag activism.

The debate featured Zeynep Tufekci, an assistant professor at the University of North Carolina at Chapel Hill, and Zellie Imani, an educator whose protest career was forged in the literal fire of the Ferguson protests.

Indeed, there have been many hashtag movements–Occupy Wall Street, Black Lives Matter, the Arab Spring, KONY 2012. Yet as I listened to the discussion, I kept waiting for conservative movements to be mentioned as well, only to be struck by their conspicuous absence.

While the points raised at the debate on whether hashtag activism works were often quite insightful (more on those in a moment), the omission of right-wing Internet movements from their analysis speaks to a deeper flaw in the progressive mind’s understanding of online social activism. It is an error that, if gone uncorrected, could leave the far left vulnerable to the far right in the future.

Hashtag movements often struggle with the tactical changes necessary to meeting changing conditions, instead ‘hitting a wall at the first big turn.’

Ideologically speaking, Tufekci and Imani seemed pretty closely aligned, and neither questioned the efficacy of hashtag activism in drawing attention to various issues and campaigns. Tufekci’s main concern was that, because hashtag movements grow up so quickly and thus bypass traditional institutional mechanisms, they wind up being less effective in implementing concrete policy goals. What’s more, as evidenced by Occupy Wall Street and KONY 2012, hashtag movements often struggle with the tactical changes necessary to meeting changing conditions, instead “hitting a wall at the first big turn.” By contrast, Imani pointed to concrete legislative achievements associated with the Black Lives Matter movement (such as mandatory body cameras on police officers in many states), as well as how early online civil rights protesters successfully pressured Florida police officers into arresting George Zimmerman (who was ultimately acquitted).

Similar contradictions exist in the world of right-wing hashtag activism. The Tea Party movement was largely incubated online, with the movement using social media to oust Republican incumbents and fuel a GOP takeover of the House of Representatives in the 2010 midterm elections. Tea Party conservatives also dominated Twitter during the 2012 election cycle, with the top five political hashtags of the year all belonging to conservative causes: #tcot (top conservative on Twitter), #teaparty, #gop, #romney, and Mitt Romney.

At the same time, as with left-wing hashtag campaigns, the right-wing movements weren’t always effective. The 2012 elections, after all, were a disaster for the Republican Party, and an argument can even be made that the radicalism of Tea Party candidates in key races helped keep the Senate out of the GOP’s reach in 2010.

Of course, none of this matches the biggest Twitter phenomenon in politics–Donald Trump’s presidential campaign. “One of the most central tools to Trump’s penny-pinching campaign is Twitter,” observes Amber Phillips of the Washington Post. “The 69-year-old uses the tool like a digital native, more prolifically than any other presidential candidate and arguably with much more skill.” This has allowed Trump to spend comparatively little money on traditional forms of advertising and politicking, instead garnering media attention with a series of provocative statements that have captivated the world of American politics. As a result, the self-proclaimed “Ernest Hemingway of 140 characters” has managed to conquer the Republican presidential nomination despite the fierce opposition of his own party’s establishment. “Trump is comfortable ceding every character to his rhetorical flourishes,” writes Amanda Hess of Slate, in a piece that brilliantly deconstructs exactly what makes Trump’s tweets so effective. “They work so well, the actual content hardly matters.”

This goes a long way toward demonstrating why, if one is going to have a comprehensive discussion about hashtag activism, it is absolutely necessary to include the conservative movement in that conversation.

Each side of the ideological spectrum is going to determine our future as a country, and so it behooves us to pay attention to both of them.

By being unaware that another side of hashtag activism flourishes, the political expert class put itself in a position to be totally blindsided by the success of Trump’s presidential campaign. Similarly, by failing to examine how social media-driven movements like the Tea Party can both take major strides toward achieving their goals (i.e. turning the House of Representatives in 2010) and hinder their own progress (i.e. costing themselves the Senate that same year), the FIRE debate overlooked an intriguing angle of the larger debate about hashtag activism successes and failures.

It is interesting that, throughout the night, both Tufecki and Imani made repeated references to the protest movements of the 1960s. This was entirely appropriate, as the 1960s and early 1970s was a chronological focal point for progressive activism in the United States, including the civil rights protests, the anti-Vietnam War protests, and countercultural activity in general. Because each of these movements utilized new forms of media like television to mobilize supporters and attract attention, and because each had a mix of successes and failures, it made a great deal of sense to compare the current period in American progressive history with its most obvious immediate antecedent.

Yet if we are to truly learn from the 1960s, we must start by remembering that ours is not the only voice that can use new technologies for potent political effect. After all, the 1960s were also the decade that begat the modern far right, starting with Barry Goldwater’s Republican presidential campaign in 1964 and continuing with a wave of right-wing campus radicalism that ultimately produced many of the modern conservative movement’s current leaders. The same can be said of our own time. Even as laudable movements like Black Lives Matter and Occupy Wall Street attract our attention, less than noble endeavors like Trump’s campaign also strive for power in this country.

Each side of the ideological spectrum is going to determine our future as a country, and so it behooves us to pay attention to both of them.

Photo via Michael Coghlan/Flickr (CC BY 2.0)