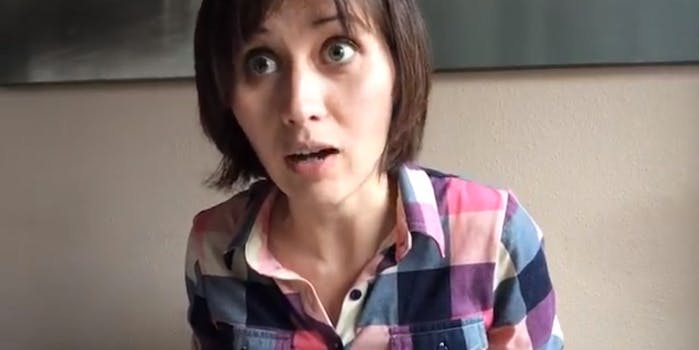 A man standing up for his daughter is a hero, but a mom who does the same is a bully.

A video from YouTube personality DoeEyes addressed to the “boy who likes my daughter” has been making the rounds this week, with over 98,000 views and a growing number of comments. The video has captured the attention of the feminist Internet, with sites like Jezebel applauding the mother for her callout of the boy who’s harassing her daughter. However, as the comments on the video illustrate, not everyone is in love with her outspoken comments to the student who won’t leave her daughter alone.

In the video, she asks the boy who’s aggressively pursuing her daughter to stop, noting that her daughter has repeatedly indicated that she is not interested in extremely clear terms. She goes further, articulating that this is a symptom of a larger social problem: People don’t know the meaning of the word “no.” Commenters, though, suggest that men will never get dates if they aren’t willing to persist, and they’re accusing DoeEyes of bullying the unnamed boy, suggesting that she’s a bad mother for not resolving the issue privately—though she hasn’t disclosed whether she even tried.

The video itself, and the response, illustrate the power of social media when it comes to talking about harassment—as well as how people deal with it. Her video as it stands is a brief, compelling commentary on how awful it feels to be doggedly pursued by a boy who won’t hear, or respect, requests to be left alone. The responses, however, blame her for “shaming” the boy, claim that she’s exposing him to retribution from other students, call her a “helicopter parent,” and make excuses for him; one even suggests that he might be autistic, so his behavior should get a free pass.

Is a woman with over 10,000 subscribers abusing her platform to expose a harasser? Context matters immensely in this case—and fortunately, we have comparable cases to draw upon.

Earlier this month, for example, Curt Schilling responded to racist harassment sent to his daughter with a public tirade that included screenshots and usernames. Unlike DoeEyes, he really did name and shame the participants in his daughter’s harassment, and he was celebrated on many corners of the Internet as a parenting hero. In fact, he was even praised for drawing attention to online harassment—despite the fact that women have been talking about the issue for years.

In 2012, Alec Baldwin captured attention when he “rallied Twitter” to protect his partner from insults and abusive behavior. Like Schilling, he directly named the harassers and encouraged his followers to take direct action. Oddly enough for a man known for high-profile media antics and sometimes criticized for inappropriate behavior, Baldwin got a nod of approval for standing up for his partner.

Both men had effectively called on their followers to dox the people harassing the women in their lives, repeating the very behavior they claimed to be upset about. While harassment is never acceptable, neither is creating a situation in which harassers themselves are harassed, sometimes to the point of being driven off social media or fired from their jobs.

What DoeEyes is being attacked for, they were praised for—and she’s not the only woman who’s been hit by this double standard. Gaming journalist Alanah Pearce started notifying the mothers of her harassers and posting the subsequent interactions—with names redacted—attracting negative attention of her own even as feminist groups praised her. “Justice, when served, sure is sweet,” wrote Jill Pantozzi at the Mary Sue. Some of it was blowback from Gamergate, thanks to the nature of her work, but some of it appeared to be pure anger that a woman would push back at the people harassing her.

It wasn’t just Gamergaters and trolls who were unhappy, though. “Who gets to pass judgment? And who gets to carry it out?” the Washington Post‘s Alyssa Rosenberg asked in response to Pearce’s actions. Rosenberg writes that she has stopped shaming her own harassers, but her situation as a journalist receiving comments from people who dislike her and her work is different from that of a mother concerned about her daughter’s welfare. However, Rosenberg pointed out: “Knowing that you want someone to hurt or to be embarrassed for his or her bad behavior is not the same thing as having a clear sense of justice and proportionate consequences.”

Her arguments against publicly shaming harassers include concerns about mistaken identity and pile-ons, and those concerns are merited—but context still matters. In DoeEyes’ video, she doesn’t name the boy involved or provide any identifying information, nor does she invite followers to track him down. That doesn’t sound like an abuse of platform. The random Internet strangers in her comments will never encounter him and have no way to reach him. While fellow students may be able to figure out who he is and he may become a target for attention among his peers, maybe he should be.

DoeEyes could be sparking a conversation at the school about harassment and appropriate behavior through a public video holding the boy accountable without specifically citing his name. Had she gone through private means, as many of the commenters say she should have done, the only resolution might have been a pledge for his parents to talk to their son, and a half-hearted promise on the part of a school official or teacher to keep an eye on the situation.

By taking the situation to a public forum, DoeEyes also sent a larger message, which she freely stated was her point: It’s okay to say no, you should feel comfortable saying no, and when someone says no, it should be respected. She sifted through different responses—“ask again later” “let me get back to you”—to point out that there is a distinct difference between “please do not pursue this any further” and “I’m open to further discussion under the following conditions.”

Her video wasn’t just about shaming a specific individual for inappropriate behavior. It was about shaming an entire culture of bad behavior, explaining why it’s a problem, and providing some easy tips on avoiding that behavior. Inviting boys to walk away when a girl says “no” is hardly an act of public shaming.

Could some of the backlash in comments be in response to the fact that she’s a woman? Dads who stand up for their daughters or boyfriends who stand up for their partners tend to receive praise for being protectors willing to go the extra mile for their families. Women, however, are criticized for the same behavior, especially when their stories are popularized in the feminist community, as though feminist endorsement automatically makes something deeply suspicious. Perhaps the real issue here isn’t whether she did the right thing but why it’s okay for a man to do what a woman cannot: defend a daughter from her harassers.