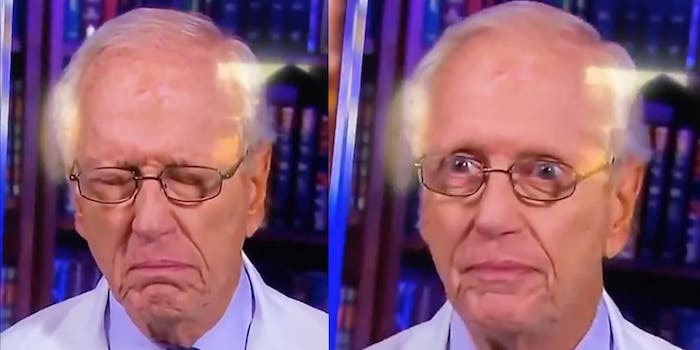 'He literally almost messed around and blew his eyes out. Concerned.'

A medical professional who tried and failed to hold in a sneeze during a recent appearance on CNN has gone viral for his valiant effort.

Dr. William Schaffner, a world-renowned infectious disease expert and professor at Vanderbilt University, seemed to internally panic as the sneeze crept up while being interviewed by CNN host Erin Burnett.

He was even late to covering his sneeze—only covering his mouth with his hand after the sneeze happened. (The CDC recommends sneezing or coughing into a tissue or the inside of your elbow.) Following his failed attempt to muzzle the sneeze, Schaffner momentarily appeared wide-eyed, likely realizing the optics amid the ongoing coronavirus pandemic.

Schaffner followed up with a short laugh before nodding to someone off-camera. And the internet loved it.

The clip was shared to Twitter by someone who watched it in real-time.

“The look of a man that has let his country down,” user @Kuon_shin joked.

Others argued over the assumed danger in holding in a sneeze and were thankful the doctor didn’t explode on TV.

“He literally almost messed around and blew his eyes out. Concerned,” user @HUNTRRxHUNTRR said.

Undoubtedly, at least some of the people on-set with Schaffner had to have fled the scene, right? Even if sneezing isn’t a common symptom of COVID-19, you can never be too safe.

Others could only properly convey their reactions with memes.

The clip has been viewed more than 5.5 million times thus far, with over 133,000 retweets and counting.