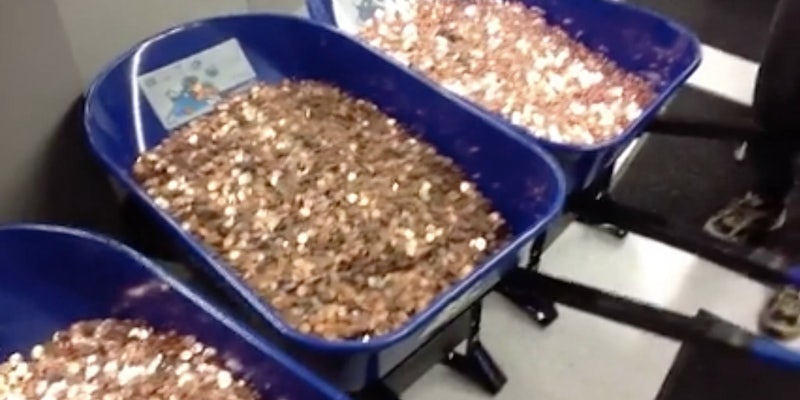 It took over 12 hours to count.

It is so, so, so easy to hate the Department of Motor Vehicles (DMV). It’s just so horrifically, soul-crushingly bureaucratic that pretty much the only person who could love them is Hermes from Futurama.

The DMV once accidentally suspended my driver’s license, which I only found out about when I got pulled over by a cop, who informed me that I was lucky he was in a good mood, because while it was “well within his right to take my ass to jail,” he was only going to have my car towed.

When I went to the DMV that afternoon to find out what happened, the agency pulled up my account and immediately apologized: “Wow, sorry, someone messed up. You are in perfect standing. We should not have suspended your license. That is our fault. Your reinstatement fee will be $150.”

Despite the DMV’s admittance that it accidentally suspended my license, I still had to pay the reinstatement fee.

It’s things like that which drive normal, upstanding citizens up the mother-bleeping wall, forcing them to take drastic measures to make a point.

Like Nick Stafford, who had been squabbling with the Virginia DMV (the very same place I had my issue with). He eventually won, but he still decided to get the last laugh by rolling in with five wheelbarrows full of almost 300,000 pennies, the copper equivalent of his $2,987.14 tax bill.

Here he is, entering the DMV in a manner as triumphant as MacArthur returning to the Philippines.

Stafford is a resident of Cedar Bluff, Virginia, and his qualm began when he had a simply query for the DMV about what address of his he needed to use to register his son’s car. He was forced to deal with the state’s main call center, instead of getting to specifically contact the Lebanon, Virginia, department he wanted to speak with.

Instead of endlessly waiting on hold, he submitted a FOIA request to get a direct number to the branch. The request was granted, but that wasn’t enough for Stafford, who then sued to get the direct numbers for all of the DMVs in his area. In court, the DMV conceded, handing him a list of numbers.

That victory wasn’t enough for Stafford, either. When his tax bill came, he went to the bank.

Stafford hired 11 people to help him break open every single roll of pennies and dump them into wheelbarrows. Nearly 300,000 pennies in all, which weighed in at 1,600 pounds.

Stafford brought the coins in on Wednesday morning, and the DMV employees began counting by hand. The staff did not finish the task until early Thursday, with Stafford present the entire time.

“They’re really nice in there,” Stafford said when asked about the employees counting his change.

Stafford was well within his right to pay in coins, as the Coinage Act of 1965 says “United States coins … are legal tender for all debts, public charges, taxes and dues.”