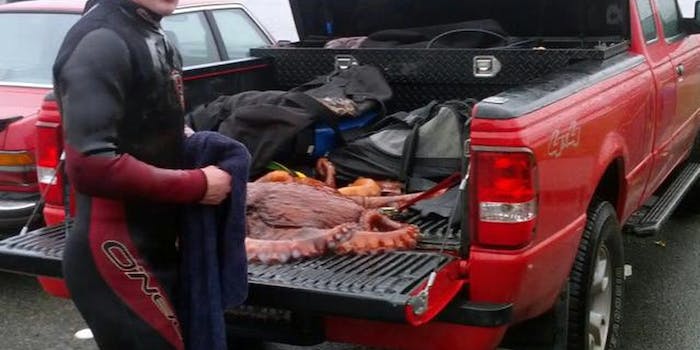 Divers cause Facebook outrage by hunting and killing octopus

Two Northwest divers faced a major backlash for capturing and killing an octopus and then bragging about it on Facebook.

Two Seattle-area divers are facing major backlash online after bragging on Facebook about capturing and killing a giant Pacific octopus.

Jake Whitbeck and Dylan Mayer emerged from Seattle’s Cove Two on Wednesday afternoon carrying a giant Pacific Octopus, the largest species of the octopi family. The two then proceeded to dump the squirming and flailing animal in the back of the pickup truck. Later that night, they uploaded a series of photos chronicling their actions to Facebook.

The backlash began on Thursday when Northwest Diving Institute, a local diving school, republished one of the photos and message on their timeline:

“As many of you have been following, Dylan Mayer and Jake Whitbeck killed a female Giant Pacific Octopus at Cove Two yesterday. This is especially difficult as catching a glimpse of a GPO is often the highlight of any dive there, for new divers and experienced divers alike. As such, these gentlemen have been banned from our shop for life.”

As of this writing, the image has been shared 354 times and the post has garnered over 800 comments, the overwhelming majority of them blasting Mayer and Whitbeck for their actions.

One such commenter was Whitbeck himself.“This makes me sad that [I] am now banned from the dive shop that [I] was licenced [sic] at for doing something that others divers do on a daily basis and is perfectly legal,” he responded.

To be clear, Whitbeck is right regarding the legality of his actions.The state of Washington permits the catching of octopus so long as the individual is licensed and follows certain guidelines, something Whitbeck and Mayer both did.

According to the divers who confronted the two, however, the area is seen as “what amounts to a petting zoo” by the local community, and it’s considered uncouth to go fishing and hunting there. Fellow divers also took issue with the bragging and disrespectful nature of their tone. Some outraged Facebook users say they’ve started a campaign to have the area declared a “no-take zone,” a rare government designation that would ban fishing of any kind.

Many also dispute the gender of the captured creature. In their postings, Whitbeck and Mayer were adamant in their claim that the octopus was male. At least one diver, who spoke to a local news outlet, disagrees.

“I said, ‘That’s a she and she’s probably here to lay eggs,’” Bob Bailey told KOMO 4 News. “At which point he looked at me and said ‘She was on eggs and now she’s not.'”

Regardless of who’s telling the truth, Whitbeck and Mayer— who claim to be engaged to each other on Facebook— have gotten enough negative feedback that they’ve changed the privacy setting on their profiles. Still visible, however, is the following update written by Whitbeck:

“Everyone harrassing [sic] us is missinformed [sic], we are clearly in our rights…there were no eggs and it was a male.”