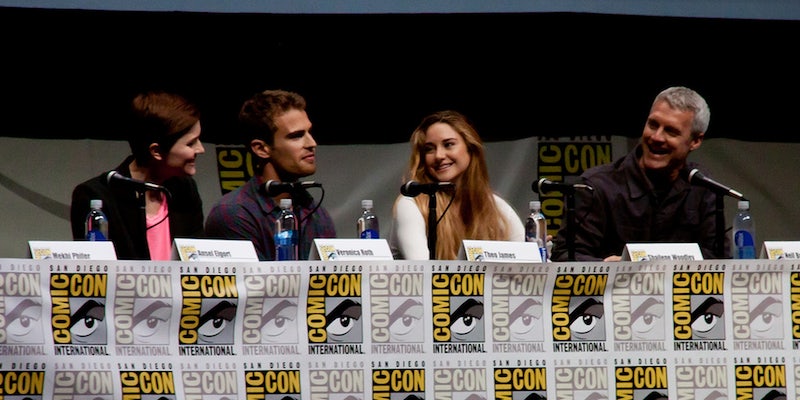 Divergent might have been number-one at the box office this weekend, but the YA curse isn't over yet.

Analysts are widely championing Divergent’s box office performance this weekend, as the YA-flick brought in $56 million against its $80 million budget. Forbes called its opening “terrific,” and The Hollywood Reporter claimed that Divergent “broke the curse” of young adult adaptations at the box office. 2013 was besieged by YA failures, which fell from the sky like birds at the beginning of a disaster movie, signs of the impending apocalypse. By Saturday, Divergent had already made more in its opening weekend than The Mortal Instruments, The Host or Beautiful Creatures earned during their entire runs.

But Divergent hardly soared. It just cleared a very low bar set by its predecessors. Based on early weekend projections, the film well underperformed initial expectations—with pre-release estimates ranging between $60 and $70 million. Pre-sales for Divergent dominated Fandango, even outpacing the first Twilight film, but Catherine Hardwicke’s series kickoff debuted with $69 million, which translates to $80 million in today’s dollars. According to The Wrap, sales of Divergent have “outstripped” Twilight at this point in the book’s run, yet the Shailene Woodley vehicle is failing to flex the same box office muscle.

If you need an answer why, check out the reviews. Divergent debuted with a score of 48 on Metacritic, lower than Beautiful Creatures or Ender’s Game. If it were a Twilight film, its reviews would rank it fourth in quality, ahead of only New Moon and Breaking Dawn Part 1 (in which a werewolf falls in love with a baby, which will later rapidly age through the creepy power of CGI). Divergent beat that movie by a paltry three points. Although audience reviews on the site were somewhat nicer (scoring an okay 6.2 from Metacritic users), critics called Divergent “unimaginative and bland,” “unrelentingly grim” and “dauntingly dumb.” I imagine those quotes won’t go on the DVD case.

It’s hard to believe now, considering the series’ reputation as The Worst Thing to Ever Happen to Humanity, but Hardwicke’s Twilight installment debuted with middling to decent reviews back in the simpler days of 2008, before the people knew what a Bella Swan was. Twilight bagged solid write-ups in Empire and The New Yorker, called “blissful madness” by the magazine’s Richard Brody. Even Roger Ebert was kind to the film, noting that the film would “mesmerize its target audience, 16-year-old girls and their grandmothers.” He exempted their mothers, arguing that they were too wise “about boys like this.” All in all, the film earned a 56 on Metacritic, not something to write home about but hardly a franchise killer.

Condon and Weitz prove that you can turn in a subpar sequel, after your franchise has built an audience, but the initial installment usually needs to be well-received to earn the story a second life. Although the sequels earned increasingly hostile reviews, Michael Bay’s first Transformers movie got surprisingly warm notices, with a 61 on Metacritic. Launching a franchise is like building a brand: you have to establish quality if you want customers to keep repeatedly paying for what is virtually the same product. This isn’t about the mythical power of the critic, an arbiter of good taste, but good PR. Rotten Tomatoes is simply the closest thing the movies have to Yelp.

Many have sounded the death knell of the critic in the Internet age, as established critics like the beloved Glenn Kenny, J. Hoberman or Elvis Mitchell lose their jobs, but the relationship between the critic and the public is simply changing, for better or worse. In today’s blog-dominated Internet discourse, reviewers are simply part of a larger discussion on film, arbiters of the conversation. Critics help generate social media buzz or kill a movie that turns out to be a stinker. All press is not good press. It’s why studios still don’t screen their cinematic garbage for critics. One critic doesn’t have the power that Pauline Kael used to, but as a collective, that consensus is a surprisingly strong barometer of success.

Although we often excoriate the movies that are popular with “the people” (see: Adam Sandler movies), the gulf between what critics like and the public likes is becoming much narrower. Of last year’s 20 most successful films, 13 earned positive scores on Rotten Tomatoes and Metacritic, scoring a 60 or more on both websites. Only the strangely critic-proof Identity Thief earned a Metascore lower than a 40, indicating negative reviews. Many of those movies succeeded not despite their reviews but because of them. The surprisingly strong notices for World War Z helped turn around the film’s bad buzz, earning $540 million around the globe. Gravity, another film that lagged in development hell, banked on its soaring reviews to earn $714 million worldwide (and counting). All of this for a movie many thought might never come out.

The correlation between quality and profitability is something that studios are beginning to understand. After World War Z was pushed back to retool the third act (then a total mess), Sony Pictures Classics learned from their success and held onto Foxcatcher, giving director Bennett Miller more time to finish the film. Great movies take not only time but investment, the right directorial touch to bring the story to life. This is why studio product that used to be factory assembled is increasingly being given to auteur talents. Universal is in final negotiations to bring Oscar-winner Sofia Coppola onto their dark retelling of The Little Mermaid, and Hunger Games: Catching Fire boasted scribes Michael Arndt (Toy Story 3) and Simon Beaufoy (Slumdog Millionaire).

To compete in that market, franchises have to show us the goods—and the talent. For Divergent, Summit enlisted Neil Burger (Limitless, 59 Metascore) and the writers of Snow White and the Huntsman and Hope Springs. (I really liked Hope Springs, but Tommy Lee Jones’ O-face is no match for Woody and Buzz.) Burger has already announced his departure from the series going forward, citing scheduling conflicts with finishing the first film, and the news doesn’t get any better from here. Robert Schwentke (Flightplan, The Time Traveler’s Wife) is on board for the next installment, aided by screenwriter Akiva Goldsman, the man who brought us Batman and Robin, A Winter’s Tale and the soporific adaptation of The Da Vinci Code. The team is also on board for Allegiant, the final film in the trilogy.

The talent deficit is a problem that plagues many YA adaptations—to their eventual demise. The Host’s Andrew Niccol once gave us Gattaca but has been on a tailspin since then. His last effort before going young adult was the ludicrous and laughable Justin Timberlake vehicle In Time. Vampire Academy boasted Mean Girls’ Mark Waters at the helm, but Waters hasn’t made a good movie in a decade. Richard LaGravenese is an Oscar-nominee, but before taking the job directing Beautiful Creatures, he did that movie where Hilary Swank reads letters from her sexy dead husband and that other movie where Hilary Swank plays a nice white lady who inspires black kids to believe in themselves. I don’t know what a Harald Zwart is, but he directed Mortal Instruments.

The young adult genre has become the province of C-list directors or former A-list talent who have been resigned to slumming it through years of bad choices. A YA adaptation isn’t where you go to put a fresh, unique spin on a book that means a lot to an audience but what you do when you have no other options. Gavin Hood didn’t land Ender’s Game by proving his artistic merit but by totally failing as a mainstream director. His indie-tinged Oscar bait (the box office bomb Rendition) fared just slightly better with critics than X-Men Origins: Wolverine, a roundly despised X-Men spinoff that nearly sank the franchise. Is this the man you want representing the future of your brand?

Like drafting an NFL player with a criminal record, scraping the sides of the barrel might save money if you’re working with a low- to mid-size budget, but the discount mentality comes with direct long-term costs. The teen market is notoriously difficult sell when it comes to marketing directly to them. Outside of the Harry Potter, Hunger Games and Twilight franchises, only two YA adaptations have ever made over $100 million dollars: Lemony Snicket’s A Series of Unfortunate Events and The Princess Diaries, with only the latter earning a (forgotten) sequel. If teens sense something is amiss with their favorite book, the evidence shows they’re more likely to stay at home and re-read it.

If there’s a warning flare in the sky for the young adult adaptation, let it be The Giver, whose trailer debuted last week. Its source material, penned by Lois Lowry, is beloved amongst high school English classes everywhere. After debuting in 1993, the short novel quickly became a favorite among Millennials as they entered adulthood, selling more than 5.3 million copies. That’s a huge potential audience, so long as the studio gets it right. But the response to the teaser has been overwhelmingly negative, as filmmakers decided to age the lead character by a solid decade and shoot in color. (Lowry’s story takes place in black and white.) The Giver doesn’t appear to be an adaptation of the novel at all, but just another knockoff of the same failed movie Hollywood keeps trying to make. It looks a lot like The Host.

Hollywood can keep churning out all the Divergents they want, shaking down the young adult market for every discount dollar they can, and they desperately need this franchise to take off. After a year of flops, the YA film industry needs a success. But to do so, they need to figure out how to make a good movie first.