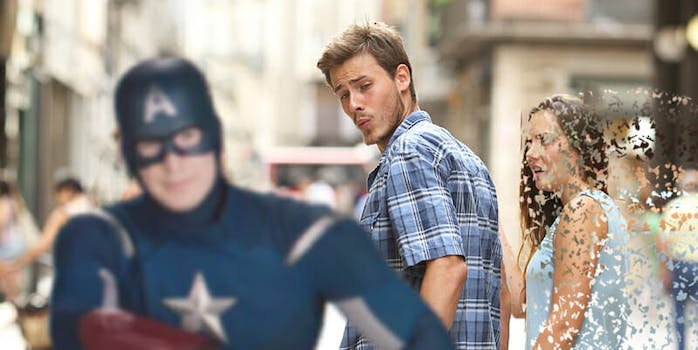 In 2017, we were gifted with the Distracted Boyfriend meme, which was not only the most important meme of the year but perhaps—as future generations might one day learn about in a meme culture class—possibly ever. The internet saw all that it had made, and it was very good.

While it may be impossible to eclipse the Distracted Boyfriend meme, the first half of 2018 has already seen some fine contenders. The Avengers: Infinity War disintegrating meme has laid waste to a spectrum of pop culture mimicking [spoiler alert] Thanos collecting all of the Infinity Stones and wiping out half of the population in the universe at the end of the film. And just the other day, Captain America sat down with the internet for a collective talk, which has already exploded in popularity.

But what do you get when you put all three together?

We’re talking a super meme, people. Self-proclaimed obsessive Star Wars fan and Photoshop aficionado @heathdwilliams came up with the meme of all memes when he tweeted the following image this week, which replaces the other girl in the Distracted Boyfriend meme with Cap, as the girlfriend turns into dust.

In a word: brilliant.

If this were a different film, you could say Thanos was just three memes away from erasing half of the internet. Fine, I’ll go back to my corner now.