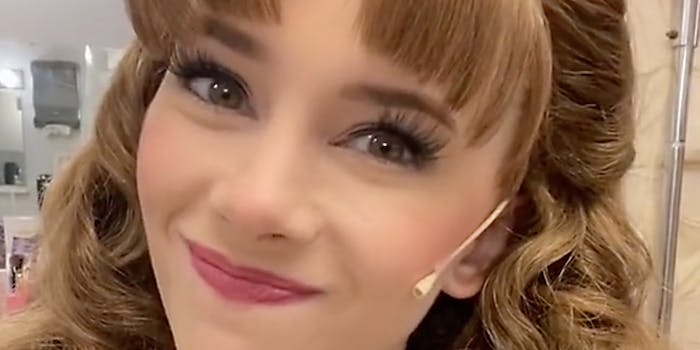 ‘I had married men hand me keys to their hotel room’: Ex-Disney worker says married men hit on her when she played Tinker Bell

'Why is it always Tinkerbell?'

A former Disney worker revealed that married men used to hit on her when she was in character as Tinker Bell in a viral TikTok video.

Sarah Daniels, @sarahdanielstv on the platform, was responding to a question from a viewer, who asked: “How many Dads end up hitting on you BECAUSE you’re the character? As opposed to because you’re an attractive woman?”

In her TikTok bio, Daniels says she is an “ex-Disney princess.”

“I feel like if dudes are going to be creeps and hit on you, they’re going to hit on you whether you’re a character or not,” Daniels says in response.

“But there were many moments, especially as Tinker Bell, where I had married men hand me keys to their hotel room and tell me where they were staying,” the former Disney cast member continues.

Daniels is a TikToker with over 50,000 followers. She often answers questions about what it’s like to play a Disney princess in Disneyland. Her videos center around topics like “Do the costumes smell” and “How heavy is Ariel’s fin?”

Accumulating over 355,000 views and 34,000 likes in a matter of five days, the Tinker Bell video is one of her most popular videos.

Many of the 172 comments question why Tinker Bell, in particular, is sexualized and slam the men in question.

“Ok… so like why is it always Tinkerbell?? Cause when I’d cosplay her… THE HORROR STORIES,” one commenter said.

“So messed up that they go to a place for CHILDREN with CHILDREN around and act like this,” says @Raz.

The Daily Dot reached out to Sarah Daniels for comment.