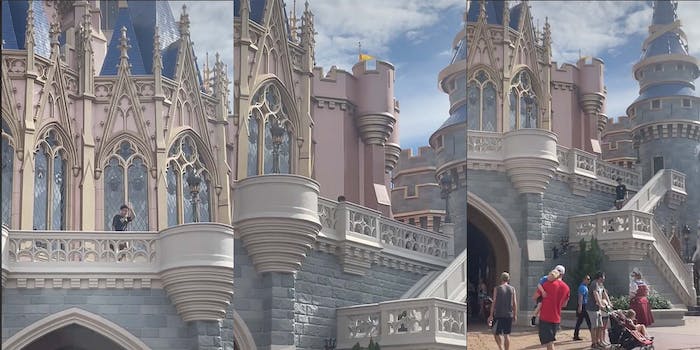 The guest was allegedly banned from Disney for six months.

In a TikTok posted on Sept. 16, a Disney World guest is seen walking along a restricted area on top of Cinderella Castle in the middle of the Magic Kingdom section of the Orlando park.

Looking over the other parkgoers, the guest waves and then quickly walks toward the steps to exit the castle.

“He knows he’s in trouble,” says @pincessshannon, who posted the video, as the guest scampers down the steps.

@pincessshannon posted a follow up video and said she saw a Disney World cast member tell the guest to not go up into the restricted area.

“But then, I guess he just did it anyway,” she says. She explained that other cast members then called security on him.

“I have a feeling security tracked him down later and he got in trouble,” @pincesshannon says.

It seems @pincessshannon guessed correctly: in a comment on her follow up video, she wrote that the guest, who is apparently an influencer from Argentina, was apparently banned from Disney for six months. The TikToker identified the influencer as Nico Vacca.

Another commenter said they saw him being escorted out of the park later that day.

“He had like 3-5 security people around him and was talking to no one,” commented @marisolelsasaenz.

When reporting on the video, Newsweek referenced Disney’s Inside the Magic blog to determine if the balcony of Cinderella’s castle was truly off-limits.

“Even though this balcony area is accessible for Cast Members, it is restricted to guests at all times,” reads the blog.

Many in the comments of @pincessshannon’s video said they thought the supposed influencer would be banned for far more than six months.

“At least he got one little video of him waving goodbye to Disney forever,” said @pincessshannon in her follow up video.

The Daily Dot has reached out to Walt Disney World via email.

This post has been updated to include the alleged identity of the parkgoer.