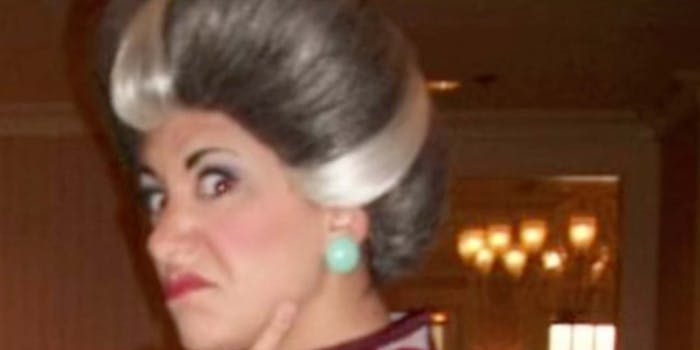 She says the rule only applies to Disney parks in the U.S.

In a TikTok posted on Dec. 4, Jessica Tremmel (@tremainetok) says that while playing Lady Tremaine, also known as the evil stepmother from Disney’s Cinderella, at Disney World in Orlando, Florida, she was not allowed to speak any languages that weren’t English.

Tremmel said she spoke both Spanish and French in addition to English while in character as Lady Tremaine.

“If I had been caught, that is a big reprimand and potentially getting fired,” she said. “I loved going up to tables of people who didn’t speak English and surprising them with the fact that I spoke their language.”

In a follow-up TikTok, Tremmel responded to a comment saying that Lady Tremaine should speak French because Cinderella takes place in France.

“It’s very hard to cast actors in the U.S. who speak French,” she said. In a later TikTok, Tremmel said that the rule was for “character integrity.” She also stitched a video that explained that if one Lady Tremaine speaks another language, “then all the other Lady Tremaines have to.” However, Tremmel clarified that the language rule only applied to Disney parks in the United States.

“In all non-American Disney parks, characters can speak other languages,” she said the a follow-up video. “In Disneyland Paris, they are encouraged to speak multiple languages and they don’t get in trouble for it there. I take an issue with that. If you’re gonna have a rule, it needs to be across all parks.”

Tremmel said in another TikTok that when she was working, but not performing as a character, she could speak other languages.

“I only ever speak about performers, not other [castmembers],” she commented.

Tremmel declined to comment. The Daily Dot has reached out to Walt Disney World.