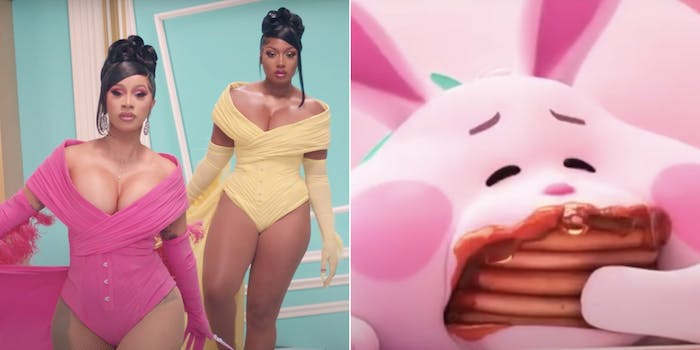 Cardi B and Megan Thee Stallion set the internet ablaze last month with their chart-topping hit “WAP.” The lascivious banger inspired a slew of cringe-worthy acoustic YouTube covers—you know the type—and they were all predictably awful. But “WAP” has finally received a worthwhile tribute in the form of a fan-made Disney video.

“DISNEY WAP” comes courtesy of Irie Musik Studios, and it boasts a remarkable compilation Disney movie footage, from vintage animations like Pinocchio and Cinderella to modern classics like Ratatouille and Frozen.

The cognitive dissonance of watching clips from children’s movies set to lyrics like “Put this pussy right in your face /Swipe your nose like a credit card” is both jarring and hilarious. Then again, it’s no secret that Disney movies are littered with sexual innuendos.

Still, the creators of “DISNEY WAP” have outdone themselves by syncing up the footage and sexually super-charged lyrics in absurdly literal ways. When Cardi B rapped, “I want you to park that big Mack truck right in this little garage,” she probably wasn’t thinking of Mack from Cars barreling down the highway—and “WAP” has probably never reminded anybody of Ramone Purple twerking. Yet they both show up here in all their animated glory, and the whole thing works seamlessly.

“DISNEY WAP” has racked up 225,000 views since being uploaded yesterday. The video features the uncensored version of “WAP” (no “wet and gushy” to be found here), so you better watch it now, lest it get taken down.