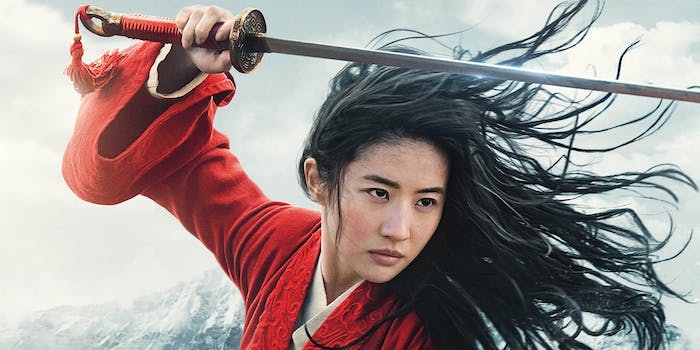 Live-action ‘Mulan’ will be released on Disney+

The movie will be released on Disney+ instead of in theaters.

After months of speculation, Disney has finally pulled the plug on Mulan‘s theatrical release. Due to the pandemic, this hotly anticipated live-action remake will now be released digitally on Disney Plus.

This isn’t the first Disney film to skip theaters in favor of a streaming release, but it’s certainly the biggest. Previous examples included Hamilton (a filmed stage production rather than a traditional movie) and Artemis Fowl, which earned bad reviews and wasn’t really counted among Disney’s A-list in the first place. Mulan, however, was expected to be one of the studio’s biggest blockbusters this year. Originally scheduled for release in March, it was delayed several times, and will now arrive on Disney+ on Sept. 4.

Needless to say, Mulan won’t just be available as part of the Disney+ package. On top of the subscription fee, you’ll have to pay $29.99 to rent the movie–not buy. That’s a reasonable price if you’re paying for a whole family to watch, but it’s pretty exorbitant if you’re living alone, especially since you’re missing out on the theatrical experience. Although according to this clarification from Disney, the “rental” will last for as long as you’re registered for Disney Plus, so it’s not just a one-off deal like renting a movie on Amazon.

This is kind of a test case for how much Disney+ subscribers are willing to pay for a big movie like this. A traditional theatrical release just isn’t a viable option in the U.S. right now, and probably won’t be for several months. If Disney can cut out the middle man and charge a high rental price on digital releases, the studio may be able to recoup more of the budget for expensive blockbusters.

On the Disney earnings call where this news was announced, CEO Bob Chapek said Mulan‘s release should be seen as a “one-off.” They’re still hoping that America’s cinema chains can recover. So far there’s no word on Disney’s next high-profile release, Black Widow, which is still supposedly scheduled for cinematic release on Nov. 6.

The movie will be released in certain countries, such as China, where theaters are open.