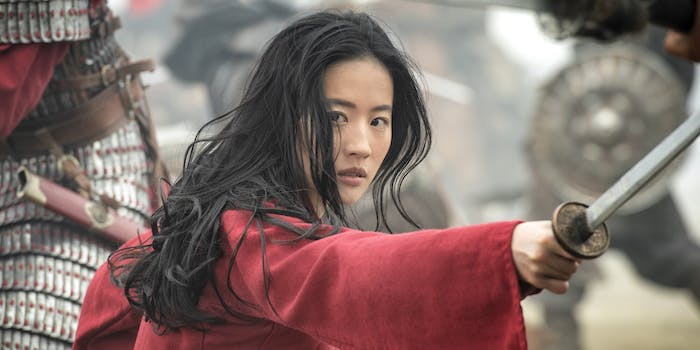 'Mulan' filmed in a province where Uighur Muslims are detained in concentration camps.

In the days since Mulan came out on Disney+, some viewers online have noticed a disturbing detail in the film’s credits: a “special thanks” section listing several Chinese municipal departments, mainly in the city of Turpan. This includes “publicity departments” for Turpan and the Xinjiang Uyghur Autonomous Region Committee, which according to Washington Post reporter Isaac Stone Fish is a mistranslation. It should read “propaganda department.” Turpan is in the Xinjiang region, where more than a million Muslims have been imprisoned in government-run concentration camps.

It seems that in order to film Mulan in China, Disney collaborated with Xinjiang municipal departments that are currently facilitating the “largest-scale detention of ethnic and religious minorities since World War II” in the region, according to BuzzFeed News. They are part of the reason why it’s so dangerous to be a Muslim in China right now, particularly the Uighur minority ethnic group that mostly lives in Xinjiang. Uighur people have been imprisoned in camps, and there are reports of re-education programs, torture, slave labor, and forced sterilization.

Experts say this falls under the United Nations’ definition of genocide.

The Uighur enslavement has been compared to the Holocaust, and while it’s essentially impossible for foreign journalists to get access to the camps, satellite photos have shown the expanding scope of these facilities across Xinjiang. There is no gray area here: Disney chose to film Mulan in China—and in this region of China specifically—as part of an ongoing attempt to court favor with the Chinese government. The film includes a credit to government departments in a region where Muslims are currently being detained and killed.

It’s possible that director Niki Caro was unaware of this when she first posted a scouting photo near Urumqi (Xinjiang’s capital) in 2017, but by 2018, major American news outlets like the New York Times were publishing stories about Chinese Muslims being targeted and detained. The Guardian‘s Beijing correspondent Lily Kuo points out that in 2018, Disney was filming in Xinjiang while the Chinese government launched its “strike hard” campaign, building more concentration camps nearby.

Mulan’s creative team made a big deal over how much research went into the film. But its work has already been criticized by Chinese and Chinese-American viewers for its clumsy and Westernized depiction of Chinese history and storytelling tropes. This “research” also makes the film’s connection to Xinjiang even harder to excuse. Disney used 20 different Chinese locations when filming Mulan, but the film’s production and set designers spent months in Xinjiang for research purposes.

Every member of the film’s creative team chose to move forward with these choices during a period when merely googling the word “Xinjiang” would immediately lead you to news stories about Uighur enslavement. This also puts a new wrinkle in Disney’s choice to hire an all-white creative team (director, writers, designers, cinematographer, composer), a group of foreigners whose on-site research would be unavoidably guided by the Chinese government. The result is a film that somehow feels more American and more Chinese-nationalistic than the 1998 animated Mulan, telling a story where Mulan is uncritically loyal to the emperor and his army, and whose job is to repel the Rouran Khaganate—an evil invading force of merciless killers in black turbans.

In the U.S., a lot of Disney-related criticism revolves around the behavior of individual actors and directors or the studio’s stereotype-rich depiction of underrepresented minorities. For instance Disney’s failure to include queer characters in Star Wars and Marvel movies, or Mulan‘s complicated role as a Hollywood blockbuster with an Asian cast. And while people do discuss Disney’s troubling business practices (like the decision to reopen theme parks during a pandemic), these deeper structural issues don’t receive as much mainstream attention as Disney’s films and products.

As an enormous media empire that targets consumers when they’re young and impressionable, Disney has an incredibly strong brand. This may be why Mulan’s disturbing political ties flew under the radar for so long. The studio’s choice to film in Xinjiang is literally a life-and-death issue, with Disney working with (and crediting) the local government in order to shoot in a picturesque location. And, most likely, to make good with China’s leadership, opening the door for more widespread Disney business ventures in the country.