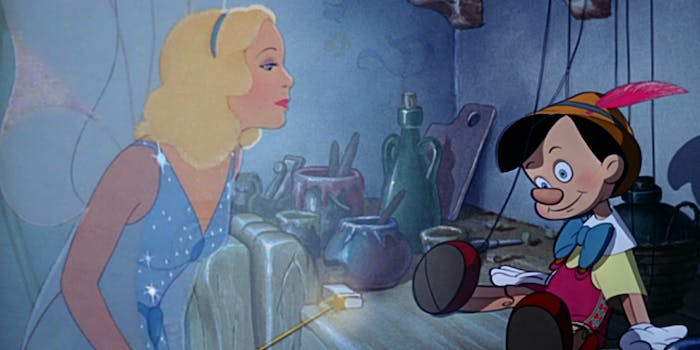 On Sunday evening, the usually jubilant entertainment company—the slogan for its California amusement park is “the Happiest Place on Earth”—shared a GIF of a scene from the animated film Pinocchio that shows the titular character as a stiff, lifeless puppet about to be turned into a boy by the Blue Fairy. The accompanying text on the GIF reads, “When someone compliments you, but you’re dead inside.” Whoever was running Disney’s social account on the weekend tweeted the GIF with the caption, “Makes no difference who you are,” the lyrics from “When You Wish Upon a Star,” the song that famously appears in the film.

Who knew that dark humor was part of Disney’s new brand? People were surprised and confused that this tweet came from Disney’s main account.

You okay there Disney?

Well that was dark, Disney. https://t.co/yuwsRhNK71

This is some kingdom hearts shit

Some people were worried about Disney, and Mickey Mouse:

somebody needs to check on mickey real quick https://t.co/SUHHO6gfOZ

Others were worried about the person running Disney’s Twitter account, who seemed to be going through something heavy in their life:

can someone check on this intern https://t.co/I9MiBTCFmh

But maybe Disney is simply trying to have some fun with, uh, depression jokes. This GIF includes the label Oh My Disney, which is a Disney website that includes quizzes, listicles, and obviously, some pieces advertising new attractions and foods at its amusement parks. So the tweet seems definitely intentional. And if it prompted a lot of people to check out this website for Disney fans, it worked.