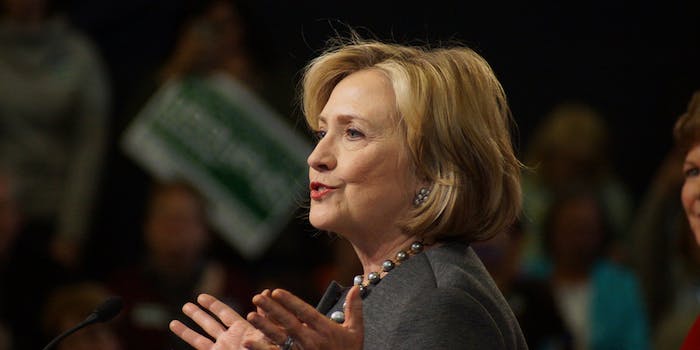 The Benghazi committee has wasted $4 million in taxpayer money. Enough is enough.

“Shut up about things you don’t know about.” In a segment from this weekend’s Face the Nation, that was Benghazi committee chairman Trey Gowdy’s message for critics of the ongoing investigation—many of which are in his own party.

Rep. Trey Gowdy (R-SC) to GOP colleagues: "Shut up" if you're not on the Benghazi panelhttps://t.co/4gJ24fF7d3

Last week, yet another Republican official admitted that the Congressional inquiry into the Benghazi attacks is intended to hurt former Secretary of State Hillary Clinton’s bid for the presidency. Rep. Richard Hanna (R-N.Y.) said in a radio interview that “a big part” of the House Select Committee on Benghazi “was designed to go after people and an individual, Hillary Clinton.” These comments followed House Majority Leader Kevin McCarthy’s derailed bid for Speaker—after McCarthy applauded the Benghazi investigation not for unearthing new information, but for bringing down Clinton’s poll numbers.

The House Select Committee on Benghazi has stretched on for well over a year, costing taxpayers more than $4 million without unveiling any allegations of wrongdoing. Benghazi might make great fodder for Internet conspiracy theories, but it’s time to admit when enough is enough.

It’s been four years since militants attacked the U.S. diplomatic compound in Benghazi, setting fire to the building and killing four Americans, including U.S. Ambassador to Libya Chris Stevens. For nearly as long, there’s been an attempt to point a finger at someone—in order to dredge up a scandal that would damage the Obama administration, including then-Secretary of State Clinton.

The House Select Committee on Benghazi has stretched on for well over a year, costing taxpayers more than $4 million without unveiling any allegations of wrongdoing.

This effort began, literally, the day of the attacks themselves. Just before 10:30pm on September 11, 2012, when reports were still trickling in, Republican presidential candidate Mitt Romney released a statement criticizing the administration’s handling of assault. “It’s disgraceful that the Obama administration’s first response was not to condemn attacks on our diplomatic missions, but to sympathize with those who waged the attacks,” Romney said.

But Romney had his facts wrong: The incident to which he was referring had taken place in another country entirely. On the same day as the Benghazi attacks, demonstrators in Egypt stormed the U.S. embassy in protest of an anti-Muslim film that an American filmmaker had recently posted online, and the embassy quickly put out a press release condemning the film. That press release was what Romney was referring to when he spoke of “sympathiz[ing] with those who waged the attacks.”

In fact, the press release of which Romney was so critical had been released before the Benghazi attack even happened.

But ever since, critics have been searching long and hard for a reason to fault the Obama administration for Benghazi. And it’s not just elected officials: The issue is a cause célèbre in some of the more conspiratorial corners of the Internet.

One such corner is the conservative website WorldNetDaily. The site floated the theory that President Obama planned to have Ambassador Stevens kidnapped in order to set up a prisoner exchange for Omar Abdel-Rahman, a Muslim cleric jailed in 1996 for a failed bomb plot. This theory rests on the premise that Obama, for some reason, wanted to set Abdel-Rahman free, and needed a pretext to do so.

Then there’s the allegation that the attack was actually a cover story for a secret Central Intelligence Agency weapons operation. This one comes from radio host Alex Jones, who published the allegations on his website, InfoWars. According to Jones, the CIA was selling weapons to al-Qaeda members in Syria in an effort to oust Syrian president Bashar al-Assad, and the diplomatic compound in Benghazi was the epicenter of this operation.

One of the more long-standing Benghazi conspiracy theories, as reported by Breitbart and many other websites, is that security contractors at the compound were ordered to “stand down” and, in essence, allow the attack to take place. It’s unclear theory why, according to this theory, the administration would want to do this.

The search for scandal in Benghazi has made its way into the mainstream media as well. In 2013, 60 Minutes famously ran a sensationalized report on Benghazi in which a British security contractor, claiming to have been on the ground during the attacks, accused the U.S. government of failing to adequately prepare for them. The 60 Minutes witness was revealed to have fabricated his entire story. CBS retracted the report in its entirety and placed Lara Logan, who spent a year producing it, on a leave of absence.

Like the 60 Minutes report, none of these allegations have been proven, and some have been debunked. Security forces weren’t told to “stand down” during the attacks, as subsequent testimonies revealed. The U.S. government did eventually train and arm Syrian rebels; while there’s much to criticize about this policy, there’s no evidence that the Benghazi attack had anything to do with it. The claim that Obama planned to have his ambassador to Libya kidnapped in order to release a would-be terrorist is extraordinary and requires extraordinary proof. There has been none.

Like the 60 Minutes report, none of these allegations have been proven, and some have been debunked. Security forces weren’t told to “stand down” during the attacks, as subsequent testimonies revealed.

We know all of this because the issue has been investigated to death. First, there was the State Department’s internal review of the attacks. That review itself became subject of a House Oversight Committee investigation. Afterward the Senate Committee on Homeland Security launched its own review of the affair, which was followed by an even more extensive bipartisan report by the Senate Select Committee on Intelligence. It was then time for the House Foreign Affairs Committee to get its beak wet, followed by the Judiciary Committee, the Armed Services Committee, the Permanent Select Committee on Intelligence, and so on.

Many Democrats suspected that these efforts were politically motivated from the get-go—but that doesn’t mean they weren’t worth pursuing. This was, after all, a deadly attack on a U.S. diplomatic mission, and by any reasonable standard, that warrants Congressional scrutiny.

But the investigations turned up nothing; the most damning finding in any of them was that the attacks could have been prevented if there was better security at the compound. But none of the committees, including the most recent one, found any official wrongdoing on the part of Clinton, Obama, or the administration in general.

The committee has fulfilled its stated purpose: It has investigated the attacks and concluded that there was no conspiracy or official wrongdoing. Every day that it continues its operations is a stain on the government’s credibility, and the Benghazi committee needs to finally be disbanded.

Seth Millstein is a political writer from the Bay Area. He has contributed to Timeline, The Daily and other publications over the last several years and is currently covering the 2016 election for Bustle. He moonlights as a DJ.