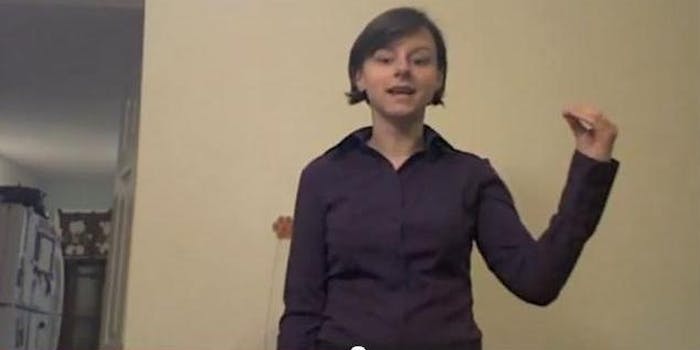 Through her unique YouTube series, Henson is teaching novices all the curse words and phrases you won’t find in textbooks.

Kristin Henson provides answers to these burning questions in her regular YouTube video series, offering step-by-step tutorials on how to say dirty words in sign language.

“The first things you want to learn in any new language are the dirty words, so that’s what I started with,” Henson told the Daily Dot.

The series started innocently enough. Henson, a 26-year-old American Sign Language novice who previously studied animation at the Rochester Institute of Technology, attempted to order a large pizza from the school cafeteria, using sign language she learned from her friend—except the employee turned away as if in disgust.

“I asked my floormate what had happened and learned I was actually taught the phrase, ‘I want lesbian vagina,’ not ‘I want a large pizza’,” Henson shared on her personal website. “From that point on, I became fascinated with learning dirty phrases in sign language.”

At the behest of friends who lived far away, Henson started posting tutorial videos to YouTube in January 2011.

“Things just grew from there,” she said.

To date, the Philadelphia-based student has uploaded 90 instructional ideos to her YouTube channel, which has garnered nearly 1.5 million views, thanks in part to her support on social news site Reddit. Each installment in her Dirty Signs with Kristin series, filmed in her apartment without any special effects, lasts roughly a minute, with topics ranging from the predictably dirty to the absolutely absurd.

There’s even a book deal in the works.

“I think my favorite is still ‘Giant Cock-topus.’ Creating portmanteaus in a different language is fascinating to me, so making the word ‘cock-topus’ was really fun.

“I also really liked ‘Skullfuck the shit out of me.’ There’s not a specific sign for the word ‘skullfuck,’ so you kind of have to explain the concept of skullfucking. The fact that I get to figure out how best to sign this concept as part of what I do just really boggles my mind still.”

Despite the phrases’ extremely lewd nature, there are some that Henson refuses to do.

“Anything that’s racist or homophobic is off-limits,” said Henson, who also avoids phrases that are so nasty they could cause readers indelible nightmares.

Naturally, the controversial videos have raised some eyebrows. Henson, who does not consider herself to be an expert at sign language, claims that some deaf individuals have given her flack for her less-than-perfect attempts at signing and her questionable content.

“On the other hand, I’ve also gotten quite a few comments from deaf people that they enjoy seeing a hearing person’s approach on how to explain certain signs,” Henson said, “and they appreciate me trying to get other people interested in signing and their culture.

Correction: ​A previous version of this article stated that Henson studied American Sign Language instead of animation at RIT.