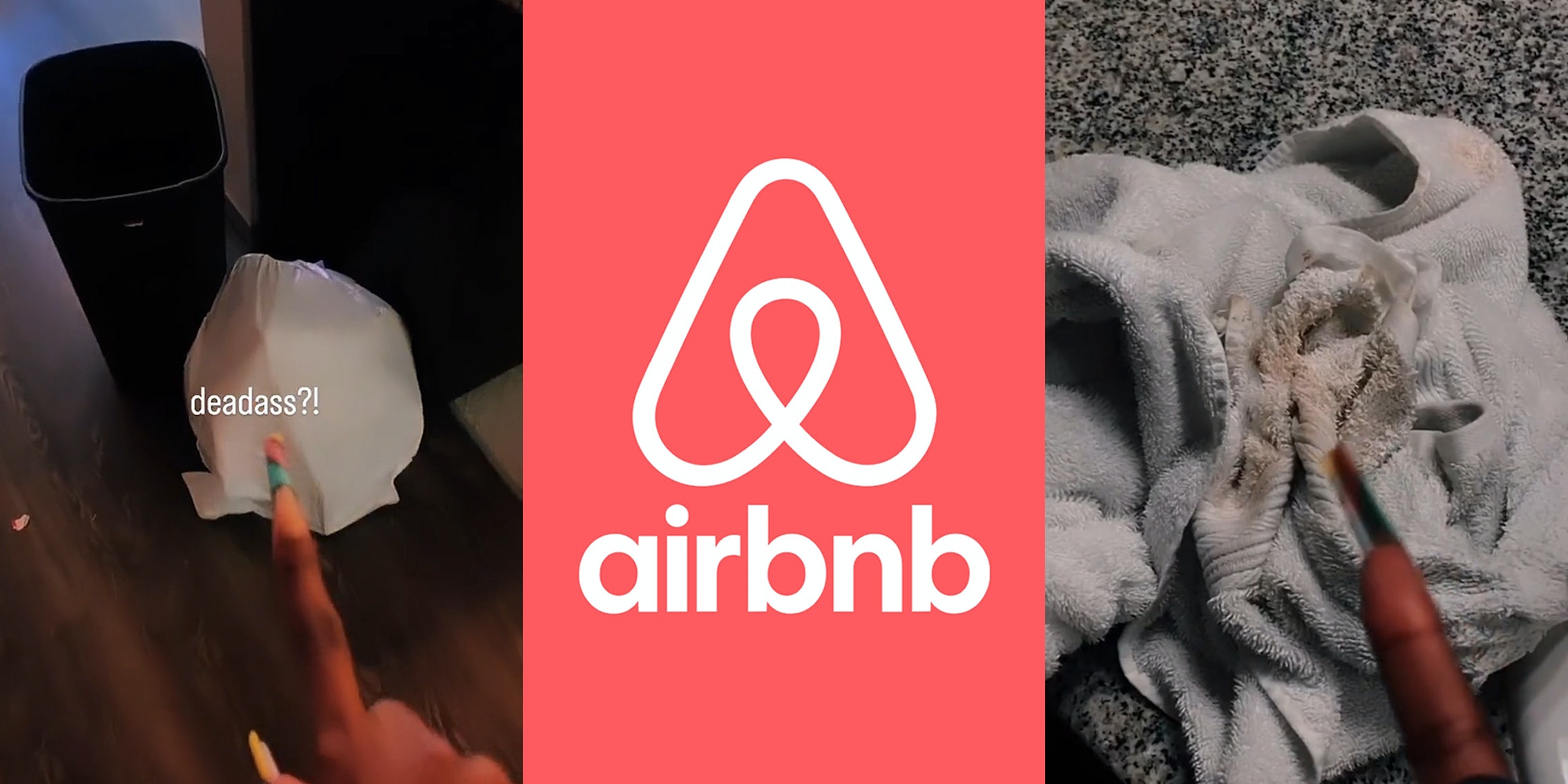 'This is a joke, right? ... Dude said that they had to clean so I couldn't check in early.'

Taking a chance on an Airbnb rental can be a hit or miss for some, and one TikToker learned the hard way after discovering her rental was left a mess upon checking in.

In a recent video, viewed over a million times, TikToker Ashley Spencer (@thetrackqueeen) chronicled her experience with walking into a dirty Airbnb rental and dealing with the company’s support.

At the beginning of the video, Spencer walks into the unit and is met with a bag of trash on the floor. She pans her camera to the kitchen and living area, which look relatively clean, but the patio door is left open. There are bits and pieces of trash on the floor and used dishes are left out.

She then enters the bedroom where the bed is unmade, with sheets and pillows messily scattered across the bed, and she also finds dirty towels on the bathroom counter.

“This is a joke, right? This is a motherfucking joke, right?” Spencer says, pointing at the dirty towels in the bathroom. “Dude said that they had to clean so I couldn’t check in early. Fine. Then, I checked in late because he didn’t give me my check-in shit on time. I checked in 30 minutes later, and this ensued.”

In her caption, Spencer wrote, “Tiktok I’m grown and pissed. YALL! airbnb pulling tricks instead of treats this Halloween season.”

In follow-up videos, the TikToker says she sent all of the footage and photos she took to the Airbnb host but they never answered. They later got in contact with her to make sure she canceled the reservation so she could receive a refund. At first, she claims Airbnb was also hesitant to give her a full refund, hoping to just refund the cleaning fee and give her a discounted rate for the rest of her stay.

“So you want me to clean my own Airbnb? You want me to throw them dirty sheets, whatever was on that towel in the wash, clean the kitchen, wash the dishes myself and still give y’all money?” Spencer says. “Is there boo boo the fool on my forehead or something?”

After leaving the dirty Airbnb, she says she got a hotel room for the night before booking another Airbnb rental. However, at that point, she still had not heard back from Airbnb support and the host with the dirty rental.

“So naturally I’m like, ‘Y’all playing with me. And I do not like to be toyed with,’” Spencer says. “So I spent all day calling. It took me threatening to get my attorney involved to get somebody to call me back.”

Things were eventually resolved, Spencer says, and she was reimbursed for the first Airbnb and the hotel fees she paid for. The company also agreed to pay for her other Airbnb rentals while she was staying in Fort Worth. Spencer says she plans to leave a thorough review for the Airbnb host.

“Y’all know I’m finna go dummy on the review,” Ashley concludes. “Y’all already know I’m finna light they asses up. But anyway they better hope I can’t leave pictures. Cause I got pictures in the arsenal.”

Research shows hygiene has been one of the biggest factors when customers determine if they want to stay in a hotel or an Airbnb. Pricing can play a role as well. Airbnb pricing has jumped more than 30% in the past three years.

Commenters on Ashley’s videos seem to all coalesce in support of her frustration, with many saying they have lately preferred staying at a hotel over renting an Airbnb.

“Idk if the cleaning didn’t come, the owner should be doing a walk through or have proof it’s clean before the next check in. They dropped the ball,” one commenter said.

“This is why I can’t get with Airbnb. I did it one time and omg never again. I’m a hotel girl. Pamper me. Sorry you had to go through this,” another user wrote.

In an email to the Daily Dot, an Airbnb representative reiterated that Spencer received a full refund and coverage for her stay at other accommodations. They also noted that Airbnb hosts face penalties for failing to provide clean accommodations for guests.

“This guest was previously provided a full refund by the Host, and Airbnb provided support through our AirCover program in order to book a new place,” they said. “Hosts are required to provide a clean listing for every guest and will receive penalties for failing to do so.”