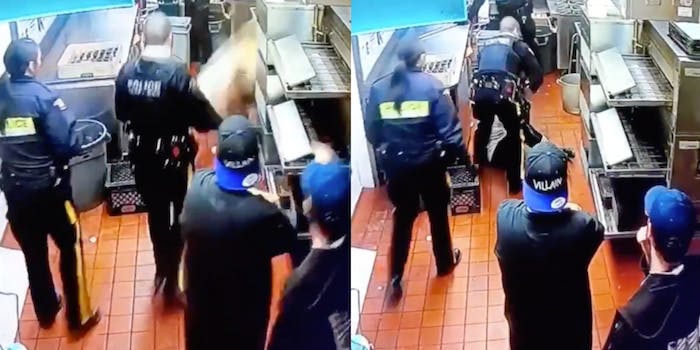 The incident was caught on video.

A dine-and-dash attempt went terribly wrong when a woman in British Columbia fell through the ceiling of the restaurant she was trying to escape—and yes, it was caught on video.

The unidentified customer reportedly climbed into the ceiling vent from the bathroom and tried to make her way out of the restaurant… somehow. Unfortunately for her, a manager heard her once she crawled over the kitchen. He called the police, and the woman actually wound up crashing through the ceiling right in front of the officers, who then arrested her.

The incident happened back in March of 2020, but the footage was only just recently released to the public by the Burnaby Royal Canadian Mounted Police.

“It looks to use that she just didn’t want to pay her bill, and once she was in the bathroom, I guess she didn’t know any other way of getting out past the manager or the employees and decided, somehow, that that was the most logical way to get away from paying her bill,” Corporal Michael Kalanj told News 1130.

Despite the theatrics, nobody was injured, and the restaurant ultimately decided against pressing charges.

“Regardless of your situation in life, no one should risk their own health and wellbeing in an attempt to evade payment, apprehension or repercussion,” a representative for the Burnaby RCMP told Global News.

The RCMP also said it decided to post the video at the end of October, months after the incident occurred, in an attempt to bring some “levity” to the world via social media during these times.

While the woman did escape charges, Kalanj said they had “some stern conversations with the lady,” who hopefully will refrain from crawling through strange ceilings following any future dining endeavors.