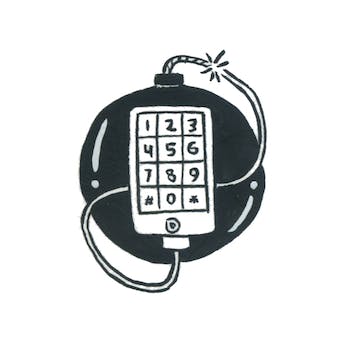 Think what you post on social media doesn't really matter? So did these four people, and this is what happened.

Sometimes, preaching the importance of privacy online is a thankless task. Let’s be brutally honest: urging people to practice digital self-defense is nearly always met with a “Yeah, so what?” That’s what social networks are for, they say—to express myself, be it by it’s posting comments, pictures, or venting about the latest irritating meme.  What most people don’t get is that these supposedly innocent posts really could result in damaging real-life outcomes. Here’s just a few that happen all the time (really): traumatic cyberbullying, a lost job, a lost court case. In this column, we’ll remind you of a few astonishing examples of how things can go very wrong, very quickly—and why it’s so important to think before you post.

Fie Laursen is 16 and does not go out much—mainly because she doesn’t like when people badmouth her to her face, she told a Danish newspaper, Berlingske. Being insulted gives her shortness of breath. The real life bullying got so bad that she dropped out of school in order to study at home, in a safe and non-threatening environment. Yet even then the bullying didn’t stop. Instead it just moved to Facebook.

How did that happen? Two years ago,  Laursen, who loves the color pink, Paradise Hotel and Paris Hilton, decided to write a diary in the form of a blog, in which the whole world could read her inner feelings and thoughts: how she likes older guys, why she sometimes breaks down and cries, or how she had dreams about being a model. Her blog took off. The teenager started making money from advertising and was even offered a TV contract, but her online success had serious consequences. Readers started insulting her in comments, even creating hate sites—some too abusive to name. When Amanda Todd killed herself in October 2012 for very similar reasons, Fie Laursen thought to herself that it might as well have been her, she told Berlingske. 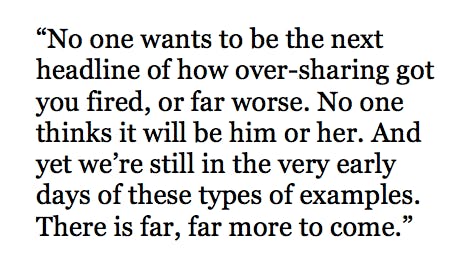 Omiesha Daniels is 22 and deeply regrets posting just one specific picture on Twitter. Daniels was in a car crash caused by another driver. Daniels broke her arm, inhibiting her ability to do her job as a hair stylist. She filed a lawsuit alleging driver negligence and sought damages for her injuries. While the case was pending, Daniels went on a vacation, during which she posted pictures of herself on the beach, partying and carrying a light handbag with her injured arm. The posts and pictures gave the lawyers the impression that she was not as injured as she claimed; in January 2013, the jury cut their $237,000 award down to almost half, with no punitive damages.

Mickey Oliver is 34, and a Facebook post got him fired. In the beginning of 2012, he was working in a fitness center that had a problem with its sound system’s volume. Mickey posted on Facebook that the gym might as well be turned into a yoga and pilates center. A couple of days later, he was fired—his boss thought the post was making fun of the gym.

No one is immune from these kinds of mistakes, even (or especially) Internet business leaders. Reed Hastings, the 52-year-old CEO of Netflix, got a warning last year from the U.S. Securities and Exchange Commission over a Facebook post. He posted the fact that Netflix users had streamed one billion hours in a month for the first time to his 200,000 friends. As a result, Netflix’s stock jumped 6 percent. The SEC slapped Hastings with a serious warning: the announcement was considered material information, information that should have been formally presented via traditional channels instead of in a Facebook post.

That’s just the tip of the iceberg: four cases with four different types of unintended consequences, from lost jobs to lost court cases to illegal stock manipulation. In the age of oversharing, we’re forced to live our lives in public, and we’ve even become our own publishers. There’s barely any filter between the private you and what’s made completely public. Almost daily, this blurring of the private and public persona leads to a new, headline-grabbing case where people share things that come back to haunt them. Social media lulls us into this sharing of previously private information by default. No one wants to be the next headline of how over-sharing got you fired, or far worse. No one thinks it will be them. And yet we’re still in the very early days of these types of examples. There is far, far more to come.

So what if you don’t want to unplug and retreat to a cabin in Alaska, off the grid—what to do? Before you post something, take your fingers off the “share” button and ask yourself these three questions:

1. Would you shout this post’s content out at the top of your lungs in a crowded check-out line? Nothing is private online—not even a so-called “closed” or private Facebook profile. This is, in fact, one of the main places where divorce lawyers look for evidence to support their clients. If you wouldn’t shout it out loud to the world, don’t post it.

2. How would this post be interpreted by your worst enemy? It’s incredibly easy to misunderstand and overinterpret online content—particularly days, weeks or years after you posted it and the original context has faded away.

3. Will I be comfortable with this post one year from now? You should absolutely not post sensitive things like health issues, mood swings, or frustrations you want to vent. Chances are, your feelings will change tomorrow. You and the object of your desire or the target of your anger will have made up or made out—but the Internet never forgets.