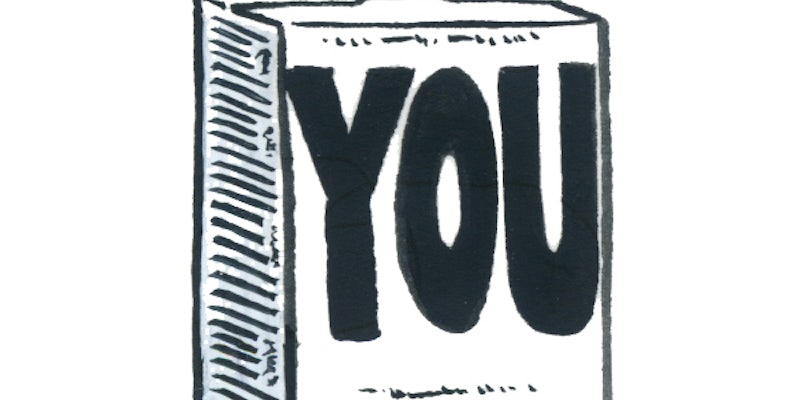 Digital Self-defense: Every move you make, they’ll be watching you

We are now in the era of friction-less entertainment. What this really means? The age of enjoying your thrills, chills and laughs in private is pretty much dead.

How would you feel if your TV network told you that they’ll only broadcast your favorite shows if you promise to:

a) put the flat screen TV with a clear line of sight onto the street and
b) also promise to never close the blinds?

Friends, complete strangers and various marketing types could then skulk and loiter outside your door to check out what you’re watching or just rock out for their own pleasure at all times.

If that sounds like a good deal – on top of the barrage of ads you have to endure or any fees you’re paying to access content – then you’ve definitely been brainwashed enough to enter the era of so-called “frictionless” entertainment.

By “frictionless” entertainment, we mean the brave new world of streamed music and videos where the producers, broadcasters, advertisers and various others (mostly stealthy tracking parties) watch what you watch and listen to what you listen to. 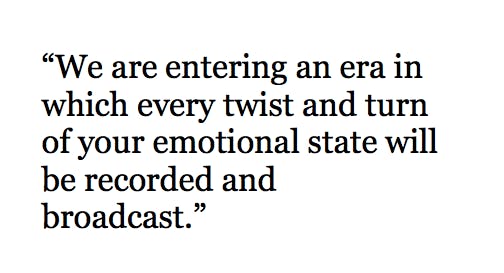 They call this “social.” But it’s really far more than being social. It’s about being completely monitored. From a commercial point of view, it is about tracking every consumer’s entertainment habits to achieve two goals: first individual metrics; and second, free marketing wherein the audience pushes a product to their own friends.

See Exhibit No. 1: Numerous music streaming services such as Spotify. These apps force you to sign up with a Facebook account and then presume that means you want your whole universe of alleged “friends” to read about what you’re listening to, song after song.

Exhibit No. 2 was just recently added: a revised Video Privacy Protection Act for which streaming king Netflix reportedly spent more than a million dollars in lobbying fees. The company will now ask you once for permission, then broadcast all your viewing habits on Facebook.

Now not only are the ad networks watching you—you are also expected to annoy the hell out of your Skype contacts and other online acquaintances by displaying your songs du jours in your status, as well as shilling for Netflix and Hollywood even though you’re already paying them.

There once was a time when watching a movie, listening to the radio or reading a book came with few strings attached, and was a relatively private act. Buy a ticket, sit through commercials or trailers, get a subscription. After those requirements, you were pretty much left alone to your tastes, preferences and musings. Getting lost in the pages of a novel, being sucked into a TV show or big screen epic, and getting scared at the latest gory horror flick all used to be private matter between your brain and the piece of entertainment media in front of your eyes.

What a quaint idea this now is. TiVo’s introduction of the DVR as a tool that watches and learns from its users led the way to something fundamentally different. “Socialized” entertainment is driven less by the individual pleasure of the viewer and more by marketing and data-mining. The process, we feel, will eventually rob us of the private enjoyment of culture. We are entering an era in which every twist and turn of your emotional state will be recorded and broadcast.

Even more intrusive is the sharing that goes on under the hood. Take the lawsuit brought against Hulu about how much user data it sucks up when you go to its website or use its app. The company argues it was data necessary to running its service, but in the end it did one thing only: pimp out its viewers and sell their data to third parties. Playlists and queues are pure gold for enhanced behavioral targeting and profile building.

We’re still just the beginning. Microsoft’s Kinect is set to turn the living room into a mini interrogation room. The little box has cameras and microphones with facial recognition, too: it can theoretically record who in a family or group of friends watches what on the screen, who pays attention to commercials and says what in reaction to the action on the screen. Microsoft recently filed for a patent to restrict playback of content if there are too many people in a room. The licensing police will literally see you now.

Reading will be up for mandatory exhibitionism next. Right now, e-readers allow providers such as Amazon or Apple to gather data on who buys and then reads or highlights what. Amazon even shares the most popular highlighted sections in a book with other readers of the same title. Google lets you build virtual bookshelves and makes those open by default. This is a bad idea, since the day is not far off when authors, publishers or others will be able to look over your shoulder as you turn a page. Perhaps you get a free book download in return for sitting in the Panopticon’s reading room.

In almost every other setting, all these practices would qualify as cyberstalking. Cue the scary music, please.

So what’s a modern consumer to do who wants to watch and listen without constantly being watched and listened in on? There are a few things we can suggest:

We believe that entertainment is a deeply private thing. That doesn’t mean you’ll always draw the blinds before you laugh, cry or snicker, but it does mean that it should be your choice. Every audience member is entitled to decide who gets to share in his or her experience.