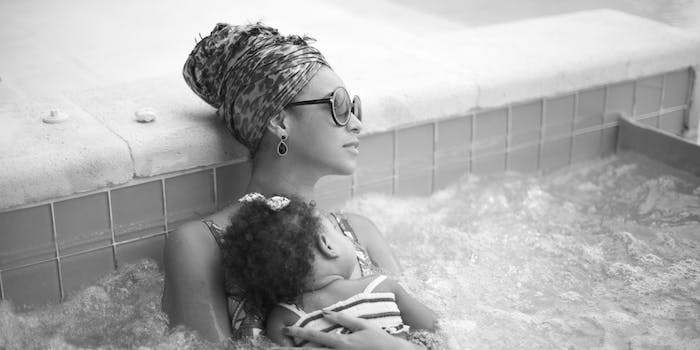 When we laugh at rape jokes about black girls, we’re part of the problem

This joke about R. Kelly peeing on Blue Ivy wouldn't have been made about a white girl.

Last fall, I was excited to see comedian Jen Kirkman do a live standup set in Halifax. Before the show, I high-fived fellow attendees about the fact that we were at a comedy show where we could trust that there would be zero rape jokes.

We were wrong. Halfway through her set, Kirkman began talking about her exasperation with helicopter parents. Railing against the determination by modern day parents to get everything right, Kirkman said that raising good kids wasn’t actually that complicated, that all you have to really keep in mind is “don’t fuck them, and don’t set them on fire.” She then began to muse at length that actually this might not even be true, because look at Oprah (who has spoken about the abuse she suffered when she was only nine years old). Since Oprah had grown up to be a hugely successful billionaire, Kirkman continued, maybe you should fuck your kids.

It felt like such a betrayal from a feminist comic I’d admired, and I felt similarly betrayed this week by Amy Poehler and Julie Klausner. The pilot of their new Hulu show, Difficult People, on which Poehler serves as the executive producer, featured Klausner’s character tweeting: “I can’t wait until Blue Ivy gets old enough for R. Kelly to piss on her.” I know that the point of the comment, in context, is to illustrate just how awful her character’s judgment is. (Indeed, we need female characters to be just as flawed as male characters.) But when you examine whose abuse is treated as acceptable fodder for humor, it’s clear this joke—as well as Kirkman’s—would not have been made about a little white girl.

In her book Crescent City Girls: The Lives of Young Black Women in Segregated New Orleans, author LaKisha Michelle Simmons outlines the difference in the way white girls and black girls are viewed with regards to their sexuality. “Not only were black women eroticized, but also many white commentators vilified black girlhood by sexualizing young black bodies and denying black girls childhood innocence,” she wrote, going on to explain: “For black girls, this meant that their bodies were available for white consumption.”

Although the days of forced racial segregation have passed, this consumption of black bodies by white people hasn’t stopped. It happens when we appropriate black hairstyles and fashions, when we use black women as props, and when we turn the sexual assault (or the threat of assault) of black people into fodder for a punchline.

In recent years, this has become something of a pattern for how entertainers and comedians treat black women and girls. While hosting the 2013 Oscars, Family Guy creator Seth MacFarlane told the audience: “To give you an idea how young Quvenzhané Wallis is, it’ll be 16 years before she’s too old for Clooney.” A tweet by the Onion later that evening called Wallis the “C-word.”  Nothing like this ever happened to Anna Paquin, who won an Oscar when she was only 11.

Childhood sexual abuse is treated as funny when it happens to black men, too. In an interview with Jimmy Kimmel, rapper Lil’ Wayne was pressured to join in the fun as Kimmel yucked it up about Wayne “losing his virginity” at age 11. However, there was nothing funny about his revelation, because children cannot consent to sex, and he didn’t willfully and enthusiastically participate in the activity, one initiated by a 13-year-old female peer.

Imagine if it had been Macaulay Culkin, revealing he’d first had sex around the same time he’d starred in Home Alone. Would the public have reacted with jeers and chuckles, or would they have been concerned? Because when we are talking about an 11-year-old child engaging in intercourse, it’s no laughing matter.

It’s hard to imagine a celebrity making any of these jokes being made about white kids, without serious career ramifications. I have never heard someone try to get a laugh at the expense of Lady Gaga, Ashley Judd, or Teri Hatcher, who have all been open about experiencing sexual abuse during their childhoods. So why do comedians bounce back from jokes about sexual assault involving black kids?

For starters, it seems like we’re just more comfortable sexualizing children of color. When little blonde girls appear in a bikini pageant on TLC’s Toddlers and Tiaras, they are “sweethearts” and “bathing beauties.” But if Kim Kardashian and Kanye West dress their daughter in a long black dress with mesh details, it is considered “trashy” and compared to lingerie. When 13-year-old Willow Smith appeared in a friend’s Instagram account, hanging out on a bed with a friend of the family, commenters were quick to declare the situation first sexual, then inappropriate.

This sexualization isn’t only something that happens to celebrity children. Fed up with the the way people were implying that R. Kelly’s victims had brought on their assaults with their “fast” behavior, feminist writers Mikki Kendall and Jamie Nesbitt Golden started a valuable conversation on Twitter last year, using the hashtag #FastTailedGirls. In an essay for the Grio, Goldie Taylor wrote, “Fast is nothing more than a synonym for whore. Nothing more than a polite calling card, a proverbial welcome mat plastered on a child’s reputation that invites public scorn, objectification or, worse, tacit approval for the physical sexual exploitation of minors.”

Part of the issue is that a lot of white folks don’t actually see black kids as kids. In repeated studies, black children are read as both older and less innocent than their white counterparts. Even black preschoolers are more likely to be suspended. And let’s not forget that when examining the lives of young men like Michael Brown and Dylann Roof, the former was referred to as having been “no angel,” while the latter was called a “troubled kid.”

#FastTailedGirls is why 20-something dudes are allowed to get away with having 14 y.o. GFs. It's why R. Kelly got off.

And as we’ve seen all too clearly in the past year, police officers are not immune to these biases. According to research conducted by Dr. Phillip Atiba Goff of UCLA, “black boys can be seen as responsible for their actions at an age when white boys still benefit from the assumption that children are essentially innocent.” The lack of innocence projected onto black children by white supremacist culture has created a conveyor belt for kids from schools to prisons. Treated like future criminals, they are almost seen as disposable. As a result, when awful things happen to black children and youth, it’s seen as somehow less tragic than if it happens to white children.

Memo to white folks everywhere: Black children are children, and the abuse of black children is just as bad as the abuse of white children. Twenty years ago, movie audiences across America gasped when Matthew McConaughey, playing a defense attorney in A Time to Kill, intoned “now imagine she was white” after describing the brutal sexual assault of a young black girl.

I found the impact of that line chilling then, and I find it chilling now—but apparently attitudes haven’t changed much. So the next time Klausner, Kirkman, Kimmel, or anyone else thinks about turning childhood sexual assault into a punchline, I would suggest they ask themselves, “Now imagine the victim was white,” and seriously consider the difference.