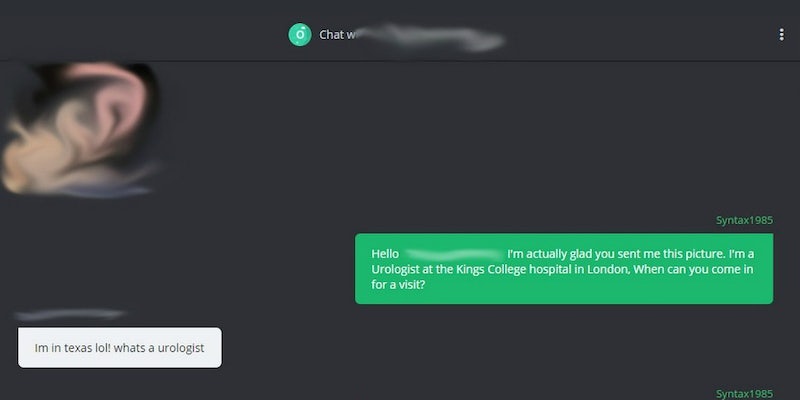 No one wants unsolicited dick pics sent to their phone, but responses sent to schvantz snapshots can border on art. Some have sent formal letters of rejection, others have tweeted the photos to everybody they know, and at least one used it to cure her breast cancer.

But when Imgur user Syntax1985 apparently received an unsolicited dick pic on his phone, he gave the sender a homework chemistry assignment. An assignment that apparently made quite a mess.

This is how i deal with unwanted dick picks.

The upside: This was a fairly harmless response, but it was clever and fun to read about.

The downside: Syntax1985—who, by the way, is not a real doctor—probably never got to see the result, and it’s unclear if the penis photographer actually got the joke and, in turn, will think about his actions in the future.

But in case it’s unclear, here’s a reminder: Even though there’s a tiny chance your dick pic could some day make it on to a list of the best dick pics ever, don’t send them to someone who might not want them. Because there’s a chance your crotch will eventually be covered with sticky batter that your body never got the chance to produce on its own.