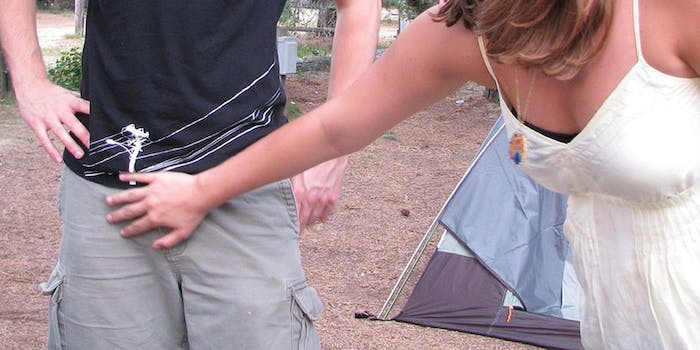 An old state law fails to account for cutting-edge harassment.

Here’s a curious 21st-century loophole for you: it may be a federal crime for a company to spam you with texts advertising their product, but sending a creepy, unsolicited dick pic doesn’t necessarily violate state law. Not in idyllic Georgia, anyway.

Charles Lee Warren was arrested in October 2012 after messaging a portrait of his penis—tattooed with the deodorant slogan “STRONG E nuf 4 A MAN BUT Made 4 A WOMAN”—to a married mother. She later contacted the police. The case wound up in Georgia Supreme Court, with Warren facing three years in prison under a 1970 obscenity statute.

But the very age of the law invoked meant the charges would soon be dismissed. The language of Code Section 16-12-81 forbids the unsolicited dissemination of nude photos etc. through the U.S. Postal Service, at least when the envelope doesn’t bear a warning to that effect, printed in “eight-point boldface type.” A bit anachronistic, to say the least.

As Warren had operated digitally and produced no “tangible” artifacts, the judges overturned a lower court’s decision against him. The “appellant did not send anything through the mail” and therefore “did not violate this prohibition,” they ruled. The court did not address defense counsel’s argument that dick pics constitute protected speech under the First Amendment.

Outdated though the 1970 clause may be, Georgia currently has no other law by which Warren might have been prosecuted. An effort to expand that original legislation to include “materials distributed through electronic transmissions” appears to have stalled. So go ahead, hit “Send” on that X-rated selfie while judicial precedent is still in your favor.