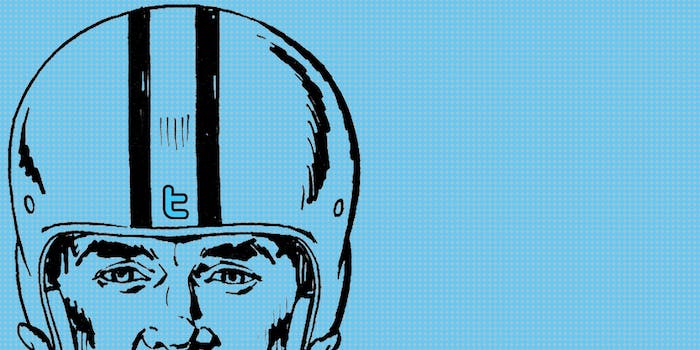 And all he did was hit "reply all" to a tweet.

Specifically, he’s not exempt from the NCAA‘s maddeningly strict social media rules, which prohibit people like Costolo from any hint of communication with prospective players. That likely includes hitting “reply all” on a tweet that mentions such a player, as Costolo did Sunday evening.

Costolo is considered a booster at his alma mater, the University of Michigan. He took part in the following, seemingly innocuous Twitter exchange, commemorating high school quarterback George Campbell’s decision to play for Michigan:

NCAA rules are extremely strict; boosters are forbidden from contacting prospective students in any way, shape, or form—and that specifically includes over the Internet. It doesn’t matter if a student has formally signed to play for the school, as the player who sent the tweet, Wilton Speight, has. (Campbell, set to graduate high school in 2015, has not.)

Michigan Associate Athletic Director Dave Ablauf told the Wall Street Journal it was a “potential minor violation” and that the school was handling the matter.

Such violations rarely warrant more than a slap on the wrist. According to NCAA booster rules, they in theory could jeopardize a student-athlete’s eligibility for intercollegiate competition” or “jeopardize a school’s membership status with the NCAA.”

As of press time, Costolo’s prolific Twitter feed hadn’t acknowledge any wrongdoing, although he did reveal in a (possibly) unrelated tweet that two different people this year have expressed a desire to kill him with a blowtorch.