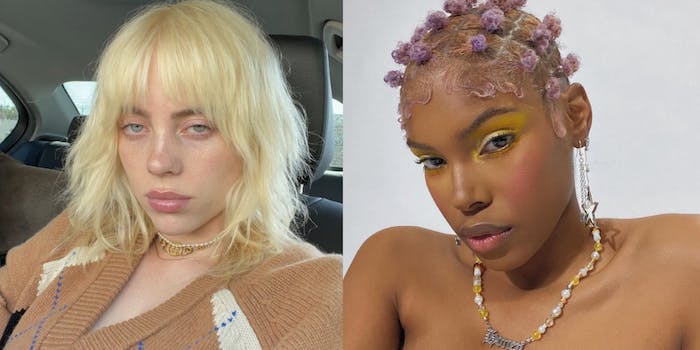 Singer Diamond White shared the similarities between her song and 'Ocean Eyes'.

Singer Diamond White accused Billie Eilish of stealing music from her in a tweet uploaded on Aug. 28. “Wait y’all I just found out that SOME THINGS in ‘Ocean Eyes’ by Billie was allegedly stolen from a 13,-14-year-old me,” White wrote in the tweet. She said she would be posting “receipts” shortly after.

White posted snippets of her song “Fire Fighter” to show the similarities between the two songs. In the video, she played the beginning of her song, that has a similar chord progression to Eilish’s breakout single.

White posted another snippet of the song, this time the chorus, which sounds similar to Eilish’s song. Her tweets suggest that the song was produced in 2013, and while it doesn’t appear to have been uploaded to streaming platforms, White performed the song at a charity concert in 2013.

She then posted a tweet that said, “I literally love Billie and I don’t even know for sure, it could just be a bunch of coincidences.”

The allegations, however, made their way to TikTok where pop culture commentators spoke about them.

One user, Hennyondatok, posted about the allegations and said that the opening chords are “eerily similar and the song ends up building in an almost identical way.”

Pablo, the Don, a music and culture critic on TikTok, stated they think the songs sound similar and that White may have grounds to seek credit. They reference last week’s news that Olivia Rodrigo granted Paramore’s Hayley Williams and Josh Farro songwriting credits after people noticed similarities with Rodrigo’s “Good 4 U” and Paramore’s “Misery Business.” Pablo said in their TikTok that artists would much rather come to mutual agreements than go through long, drawn-out court battles.

A user in the comments section wrote that White deserves credit because “Ocean Eyes” is one of Eilish’s biggest hits, to which Pablo replied saying they agree.

The Daily Dot reached out to White and representatives for Eilish and her brother Finneas O’Connell for comment but did not immediately hear back.