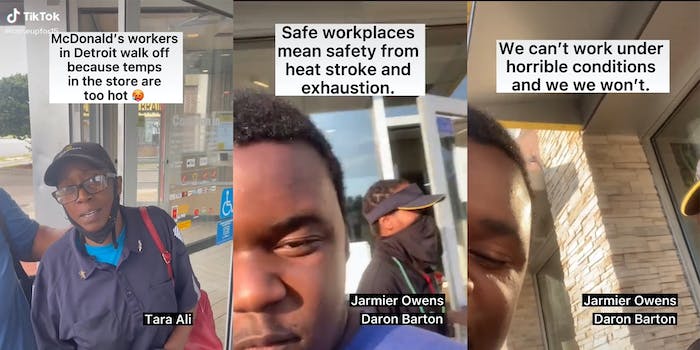 ‘We decided to not come back until the air comes back’: McDonald’s workers walk out because of temperature in restaurant

These McDonalds workers were protesting against the unbearable heat at their McDonald's franchise.

Working behind the counter at McDonald’s is hard at the best of times, but it’s much worse without air conditioning. That’s why a team of Detroit McDonald’s workers said they walked out of their store this week, documenting their protest on TikTok.

The video shows a group of workers leaving the store, explaining to the camera that the temperature inside is unbearable due to the lack of air conditioning. “It is burning up in there; it is hot like an oven,” says one. “We decided to not come back till the air comes back,” says another.

As with any video like this one, there were some detractors in the comments. But most replies were supportive, sympathizing with the decision to protest against unearable working conditions. As one commenter pointed out, “McDonald’s could afford to fix they air.”

This isn’t the first time fast food workers have used TikTok to speak out about their workplaces. A couple of months ago another McDonald’s team abandoned their store en masse. And earlier in the week week, an IHOP customer filmed an abandoned restaurant where the staff had walked out mid-shift.

In this case, the video was actually shared by a workers rights organization, Raise Up for 15. It’s part of the campaign to raise the minimum wage to $15, and its TikTok account includes a lot of fast-food content, including footage from a Los Angeles McDonalds strike where the workers were responding to violent attacks from customers. These small, spontaneous local protests rarely attract much coverage in their own right, but TikTok is an extremely efficient way to get the word out.

The Daily Dot has reached out to McDonald’s.