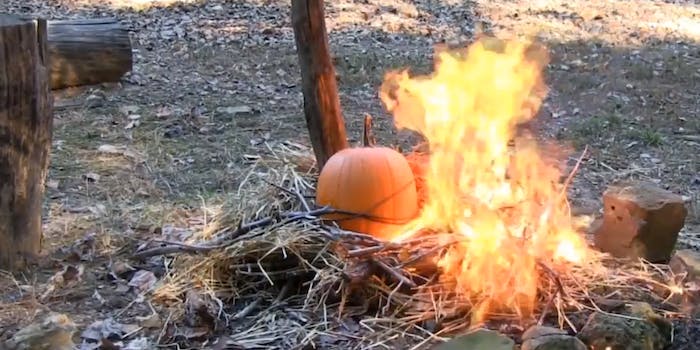 Here’s every conceivable way to smash a pumpkin

With guns, grenades, chainsaws, and more, this YouTuber is on a mission to expunge every pumpkin from the planet.

YouTuber Hickok45 is on a mission to expunge every pumpkin from the planet.

He has to kill the pumpkins.

For the past four years, this Tennessee native has filled his YouTube page with videos that find him shooting, sawing, slicing, and searing pumpkins to a blood-orange pulp. His channel, which offers a comprehensive look at all things relating to guns and “gun culture,” doesn’t always involve the shooting of pumpkins—but come Halloween season, those pumpkins are back in action, sitting on tree stumps just waiting to get demolished.

It’s a strange fetish. But hey, all fetishes are pretty strange when you get down to it.

You can sort through his myriad videos—some of which have grown quite popular—to find the specific clips in which Hicko45’s sending pumpkins to their demise, or you can scope this supercut somebody named ChuckleBerry made on LiveLeak. It’s a 3:48 clip detailing each and every one of Hicko45’s “Pumpkin Killing Methods.”