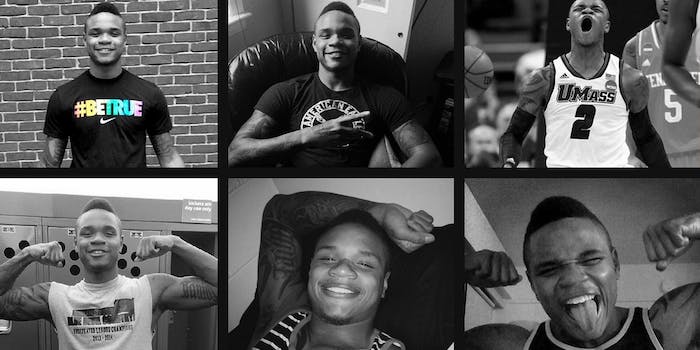 UMass's Derrick Gordon: "This is the happiest I have ever been in my 22 Years of living... No more HIDING!!!"

Derrick Gordon, a sophomore at the University of Massachusetts, started every game at guard in an impressive 24-9 season. He posted a photo of himself Wednesday, arms out and wearing a black shirt captioned “#BETRUE” in a rainbow of colors.

“This is the happiest I have ever been in my 22 Years of living… No more HIDING!!!” he wrote in the caption.

For years, pundits openly wondered who would be the first openly gay man playing one of America’s major sports. But those barriers began tumbling quickly just a few months ago: University of Missouri football player Michael Sam, a cinch to be drafted in the NFL, came out February 9. A few weeks later, the NBA’s Brooklyn Nets signed veteran center Jason Collins, who had previously announced he was gay when he was a free agent.

In an interview with ESPN, Gordon cited Collins as an inspiration. “That was so important to me, knowing that sexuality didn’t matter, that the NBA was OK with it,” he said.

Gordon’s photo is embedded below, followed by the full caption:

This is the happiest I have ever been in my 22 Years of living…No more HIDING!!!…Just want to live life happy and play the sport that I love…Really would love to thank my family, friends, coaches, and teammates for supporting me….I would also like to thank my support team Wade Davis, Jason Collins, Brian Sims, Micah Porter, Anthony Nicodemo, Patrick Burke,Billy Bean, Gerald McCullough, Kirk Walker…You guys are AWESOME!!! Ready to get back in the gym with my teammates and get on the GRIND and get ready for next season!!!! #BETRUE #BEYOURSELF#HONEYBADGER