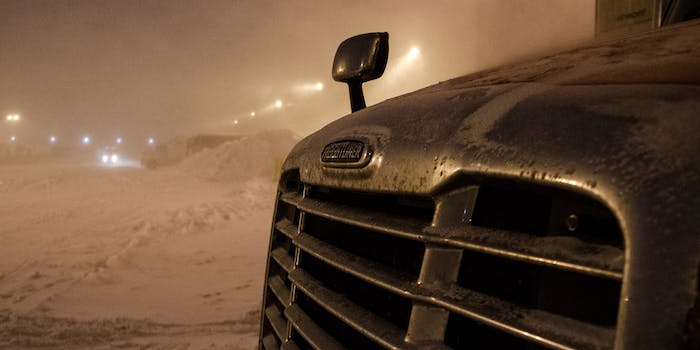 Your GrubHub driver's got 99 problems, and all of them are the service economy.

The entirety of New York City got a snow day this week as Winter Storm Juno closed businesses, forced people to hunker down at home, and led the mayor to issue a curfew notice. Only essential personnel—like firefighters and police officers—were out on the streets in the poor weather. But there’s one other group of workers who didn’t get the day off either: delivery drivers and other low-wage employees. And the fact that they didn’t get to take shelter from the storm underscores America’s class divides.

There’s something very comforting about the thought of being able to order in some pizza or Thai food even in driving snow or rain, but the comfort of the worker who braves the weather to bring that Pad Thai to the door doesn’t necessarily come to mind. In a world where middle-class workers can work from home, enjoy the benefits of paid time off, and take personal days without running the risk of losing their jobs, some may not understand what goes into getting a burrito from here to there. Others simply may not care, especially in New York City, a bastion of door to door service.

As a Chowhound commenter put it on a thread debating the issue in 2011, “This is NYC where the weather never stops us from getting our food delivered.”

Even the United States Postal Service had to call it quits in some places, but services like GrubHub, Peapod, Instacart, and more were still going strong; while their vendor lists shrank as some restaurants chose to close in the stormy conditions, users could still log on to order food and supplies from those game enough to stay open. And delivery drivers and cyclists still had to venture out to fulfill those orders, criss-crossing the city with their parcels and packages.

Some customers assume that drivers need the work, and that not placing orders would deprive them of needed income—in a way, they’re almost providing a service by contributing to the employment of food service workers. Executives at companies like GrubHub encouraged customers to go ahead and order delivery, though they suggested that people should tip well, which boils down one of the key issues with choosing to order food during a storm. Aside from the question of whether it’s unfeeling to demand that someone brave heinous weather conditions to bring you some Chinese food, the tip economy may be the bigger problem. By using tips to effectively pay hazard wages, companies are signaling that they don’t bear responsibility for paying their workers fairly, a practice seen across the restaurant industry.

The world of delivery services, from the perspective of the one doing the driving or cycling, is a complicated one. Wage laws for tipped employees—like delivery drivers—vary by state, but under federal law, they make what’s known as a “wait wage,” $2.13 per hour, with the expectation that the balance of their wage will be made up by tips (if not, employers need to pay out the difference). New York, however, is one of the exceptions to this rule, requiring that drivers earn minimum wage before tips.

$8.75 per hour, the minimum wage for tipped employees in New York, is still not much when you live in one of the most expensive cities in the world, which is why delivery personnel count on tips. In storms, this is an especially big problem, since their employers don’t provide extra compensation for working in harsh weather. Because it takes longer to drop off food in rough conditions, they’re hoping on higher tips at each residence or business not just because of their discomfort, but to make up for the tips they’re losing out on by making fewer stops overall.

Bringing food to the hungry masses can be dangerous in storm conditions, and some corporate chains require their restaurants to offer delivery, no matter what. Those working for such chains tend to have less sympathetic managers, and the consequences for calling in and refusing to drive in inclement weather can be high, forcing drivers out into the snow if they want to keep their jobs. Those who ventured out onto the streets were in for a rough time, even if their employers helpfully encouraged them to use garbage bags as ponchos in a feeble protection against the elements—and, in the case of GrubHub, those running deliveries after the vehicle ban were invited to walk them over to customers. Some, along with many shift workers, faced pressure from their employers to come to work or not bother reporting ever again.

Yet, April Conyers of Postmates claims there’s no shortage of people willing to apply for jobs that take them out in dangerous conditions, a testimony to the labor market and the competition for unskilled jobs; there’s a certain amount of desperation in the scramble for any kind of available work, including potentially dangerous jobs that require being out on the road in all weather. This is an issue that has become especially acute in an era of a growing inequalities—service workers make less, and they’re more distanced than ever before from their customers.

Nearly 600,000 people work at or below minimum wage in the area blanketed under the storm, including delivery drivers and cyclists. These working class employees typically have few workplace protections, with those in hospitality industry jobs counting on tips to eke out a living. Food service personnel are more likely to live in poverty and require government assistance, a reflection of the fact that relying on tips for wages is not working, and that’s reflected in the high turnover for these kinds of jobs, that “no shortage” Conyers provides as evidence that drivers don’t have a problem with going out in bad weather.

In a city, and a society, accustomed to convenience, the invisible workers who make that convenience possible fade to the background.

During 2014’s significant winter storm, Reddit commenters came out of the woodwork to share their experiences on the circuit, including entitled customers angry about long delivery times, poor tips, and hostile managers. One described a former manager who “made me deliver while in a State of Emergency.” The commenter continued, “Even better, he [would] answer the phones up until the exact time of closing, and sometimes even a minute or two later. [One] night I got stuck several times, had no traction, and he kept insisting ‘it’s fine, just drive slow.’”

Notably, companies like Instacart stood to make a killing from storm-related deliveries. As people trapped at home tried to stock up supplies or track down some comfort food, orders went up, sending profits directly to their parent companies. For drivers, it was a bit more hit and miss, as they were relying on tips for extra income. The same companies encouraging customers to go ahead and place their orders were those who stood to profit without actually being out on the streets; delivery drivers themselves weren’t consulted on the subject.

The question of whether it’s ethical to order food during a storm is a tough one to answer: It may provide valuable wages for underpaid workers, and some drivers at Reddit claimed they don’t mind or even enjoyed delivering during rough weather, but it’s also potentially dangerous and miserable. The happy medium may lie in ordering food from a restaurant down the block and tipping well, making it easy for an employee to walk it over in all but the very worst of weather conditions—in which case the establishment is probably closed in the first place.

The larger issue, though, is that delivery crews don’t make enough money, and that as long as their wages remain unfair, it clouds discussions like these. It might be an unkind move to force a Dominos driver out in the snow, but that driver might be counting on your tips to make rent, too.

Photo via Colby Stopa/Flickr (CC BY 2.0)