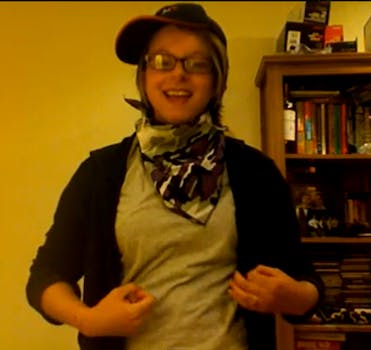 When it comes to Dirty Signs with Kristin, something is clearly being lost in translation.

That success, however, has come with a steep price. Critics claim that her videos are offensive and derogatory, and are alienating her from the Deaf community. In the past two days, a petition for St. Martin’s Press to halt the publication of Henson’s Super Smutty Sign Language Book has received more than 1,300 digital signatures.

The consensus seems to be that Henson’s signing is “woefully inaccurate, poorly performed, and completely misguiding to those who may be seeking to learn more about American Sign Language,” as Andrea K. Smith, a sign language instructor, wrote to the Daily Dot.

For example, a Twitter user claimed that one video actually translated to “Money Buy want-want-want clouds over horizon.” Dave Coyne, a nationally certified interpreter by the Registry of Interpreters for the Deaf (RID) and doctoral student at the University of Cincinnati, noted that in Daily Dot’s top 10 list he found errors ranging from “be versus bitch” and “which (palm orientation)” to the confusion of the “pronouns my and mine.”

“The above examples include errors from the basic building blocks of sign language,” Coyne wrote.

“[I]t’s four parameters: handshape, non-manual markers, palm orientation, and location. At times she is not only signing a parameter different than accepted variations, but she is not understandable.”

It’s worth noting that Henson doesn’t claim to be an expert in sign language. To her credit, she’s posted revisions to some of her videos on YouTube and has on multiple occasions responded to individual comments about her signing on the video-sharing site.

“I started making these videos to learn how to sign better, and if you watch them chronologically, I believe I’ve improved a lot,” Henson posted recently in response to the public outcry. (She declined to respond to the Daily Dot’s follow-up questions.)

“My intention is not to make a joke out of ASL, but to learn about it, and get others interested in the process. The dirty words are the first things anyone learns in a new language,﻿ which is why I started with these.”

And let’s face it; it’s not like there’s really a precise way to say “Skullfuck the shit out of me,” one of 90 phrases tackled thus far in Dirty Signs with Kristin.

“There’s not a specific sign for the word ‘skullfuck,’ so you kind of have to explain the concept of skullfucking,” Henson previously told us. “The fact that I get to figure out how best to sign this concept as part of what I do just really boggles my mind still.”

That sort of phrase, however, captures the essence of the other complaints about Dirty Signs with Kristin. While Henson claimed “anything that’s racist or homophobic is off-limits,” many in the Deaf community are appalled at the phrases—some of which are based on fan suggestions—she attempts to sign, and worse, at the prospect of her profiting from them through potential book sales and merchandise.

“[B]y her ‘teaching’ us how to ‘be’/ sign ‘gangsta’ and ‘bitch, please,’ I see a simultaneous exotification and minimization of sign language, appropriated and packaged for [white, patriarchal] entertainment value,” commented reader Elena M. Ruiz. “I don’t think it is okay to reduce any language to ‘dirty words.’”

Henson’s signing of “Damn it feels good to be a gangsta” didn’t seem much different, though, than hearing the same Geto Boys song appropriated in Office Space, or for that matter, the Gregory Brothers’ AutoTuning of Antoine Dodson for the “Bed Intruder Song”—a disturbing news report playfully skewered into unintentional pop song and viral video.

That doesn’t make it right.

What makes this scenario different is the prevalent concern that Henson’s tutorials might cause serious damage to the hearing impaired in real life.

“The Deaf community has a long way to go to overcome daily struggles in the United States,” Coyne wrote. “Further, how would you feel if you lived in a marginalized community and when outsiders approach you – they say offensive language. This causes alarm and should be viewed as ‘bad taste.’”

“As I’m sure you are aware sign language is rapidly evolving particularly within the urban and youth landscape,” she wrote. “What works in one region doesn’t necessarily work in another. [I]t’s just another layer that makes our world so colorful. …”

“Communication is a wonderful thing.”

Indeed, Henson’s controversial series has opened up an opportunity to discuss sensitive issues and stereotypes facing the Deaf community.

Unfortunately, due to her lack of involvement at the moment, it appears to be a one-way discussion.