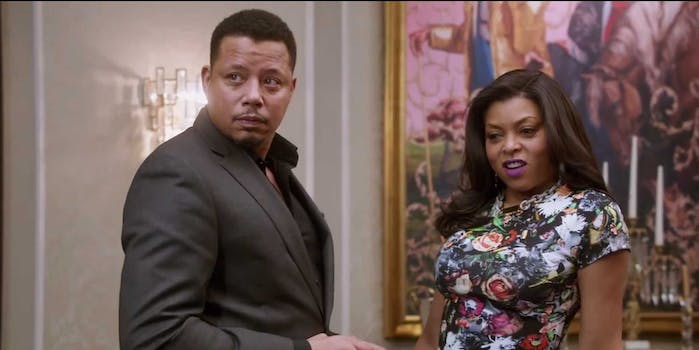 Here's what Deadline got wrong about people of color on TV.

Let’s take a moment to reflect on all of the now out of work white actors shuffling around Hollywood looking for jobs that are, simply put, no longer there. Why all the Caucasian unemployment? Well, because of the recent quotas placed on the television and film industry that require producers to cast only “non-Caucasian” actors for new roles.

This, of course, is the reality in which Deadline’s Nellie Andreeva lives. Andreeva’s poorly thought out and horribly executed diatribe against the recent uptick in “ethnic” casting on television suggests that maybe Hollywood needs to dial back the diversity a bit. She writes:

But, as is the case with any sea change, the pendulum may have swung a bit too far in the opposite direction. Instead of opening the field for actors of any race to compete for any role in a color-blind manner, there has been a significant number of parts designated as ethnic this year, making them off-limits for Caucasian actors, some agents signal. Many pilot characters this year were listed as open to all ethnicities but when reps would call to inquire about an actor submission, they frequently have been told that only non-Caucasian actors would be considered. ‘Basically 50 percent of the roles in a pilot have to be ethnic, and the mandate goes all the way down to guest parts,’ one talent representative said.

1st Reaction:: HELL NO. Lemme take off my earrings, somebody hold my purse!
2nd Reaction: Article is so ignorant I can't even be bothered.

What troubles me is the decision-makers in Hollywood who will read that @Deadline tripe about black actors in television and say, "Exactly."

Really, Andreeva deserves little more response than an eye roll, but Deadline is a major publication with a wide reach. Regardless of how untrue or racist it is, what she says matters for better or worse. This is why it’s important to speak out against inflammatory opinions like Andreeva’s. To echo the New Republic’s Jamil Smith, the frightening thing about this is that you know there are white producers in Hollywood who read her piece and thought, “Nailed it.” Some may dismiss this as a byproduct of the “age of outrage,” but you know what? This is outrageous. Heaven forbid marginalized people have their voices heard when tone deaf, ignorant, bigoted garbage like this hits the web.

Obviously—and it is so obvious—there is no shortage of white roles on television and film. In fact, looking at this year’s diversity report from UCLA, even a cursory skim of the first page will give you an idea of how grossly underrepresented people of color are in TV and film. “Although minorities posted small to modest gains in several Hollywood employment arenas since the last report, they remain underrepresented on every front,” the report says.

Andreeva’s piece, however, is not rooted in reality. While the success of the five new shows Andreeva mentions—Empire, Jane the Virgin, Black-ish, How to Get Away With Murder, and Fresh Off the Boat—is awesome, it in no way indicates a sudden “ethnic” takeover of the media industry. Five shows, to me, sounds like a small handful of work in a sea of whiteness. A rowboat next to an aircraft carrier, if you want to extend the analogy a little further.

The last influx of African-American TV took place over twenty years ago, and, against all odds, the industry remained intact.

In the wake of the success of The Cosby Show—the show that everyone cites as the example of “See? If black people make good TV, we’ll watch it”—the ‘90s were met with an influx of African-American series on network television: A Different World, The Fresh Prince of Bel Air, Martin, Living Single, Moesha, The Wayans Brothers, and more. At one point, according to the New York Times, there were 15 black television shows, but by 2001, only six had made it.

And once Family Matters ended its run on CBS in 1998 (having moved from ABC), all black programming ran exclusively on UPN and the WB. Those two networks merged to form the CW, once home of mostly angsty, white teen melodramas like One Tree Hill, now home to white teen superhero shows like Arrow and The Flash. (Jane the Virgin is the only color, unless you count the green and red tights, on the list of mostly white shows.) By the late-’90s, networks ditched black programming in favor of predominantly white series in the interest drawing more advertising revenue from a white demographic. The “pendulum” had swung back to a side that probably made Nellie Andreeva feel much more comfortable about television diversity.

Diversity doesn’t stop at the actors, though. Andreeva’s focus on how TV looks ignores the fact that writers’ rooms are mostly homogenized fraternities and that directors and producers of color can barely get a meeting with studio execs. For all of the multicultural leads in TV and film, there are just as few writers, directors, and producers.

But the truth is there is no damn pendulum. Hollywood is as white as it ever was, and the presence of a few successful multicultural shows will do little to dismantle the structure of the industry. The fact that we still have to write about representation of people of color in TV and film indicates that this isn’t a problem that will go away anytime soon. What Nellie Andreeva doesn’t understand is that popular entertainment should look like the world we inhabit and reflect the as many different perspectives as possible.

“I really hate the word ‘diversity.’ It suggests something … other. As if it is something … special. Or rare,” Shonda Rhimes, the producer of Scandal and How to Get Away With Murder, said in a speech at a recent Human Rights Campaign gala in Los Angeles. “I have a different word: normalizing. I’m normalizing TV.” Rhimes elaborates that the vast majority of the world’s population is made up of “women, people of color, [and] LGBTQ people.” TV and film should reflect that population. Unfortunately, we aren’t there yet, but shows like Scandal, Empire, and Jane the Virgin are a step in the right direction.

Don’t believe the garbage Deadline spews at you. The success of multicultural series doesn’t mean the downfall of TV as we know it. As long as there is a Hollywood, there will be plenty of work for white actors and plenty of opportunities to tell and retell white stories.