Conventional scientific wisdom says that most of the species that have ever dwelled on Earth are now extinct, that life on Earth now is just a small fraction of all the life in our planet’s long history. And so it is with memes: the ones we have now are few compared to the ones we’ve lost.

The Daily Dot has frequently been accused of killing memes by reporting on them (and we’re guilty as charged, in some cases). But consider how many beloved memes died before the Dot was founded back in 2011: too many for one news outlet to ever report on.

Reaching mainstream awareness and becoming uncool is just part of the life cycle of a meme, and it’s happened to hundreds of dank ones over the past decade. On a recent Ask Reddit thread, redditors reminisced about the fallen memes that used to delight them. A lot of these may seem lame now, due to a combination of overexposure and changing tastes, but they were the Harambes of their day.

So, let’s cue up the Sarah McLachlan and pour one out for all the classic memes we’ve lost. Maybe they’ll become retro and have a second life, or maybe we’ll find them years from now in a long-forgotten image folder and have a chuckle at what used to make us laugh out loud.

“‘im in ur base killin ur d00dz‘ was a long standing favorite back when I played Starcraft,” writes vahishta. That meme later turned into a widespread formula, “I’m in ur [x], [y]in’ ur [z],” that amused and plagued the internet for years.

“He-man and the Trolololo guy,” suggests someone with the excellent username ThereIsBearCum.

“He-Man” refers to this video of an ’80s cartoon hero singing a campy disco cover of “What’s Up?” by 4 Non Blondes. It holds up pretty well after nearly a decade, and this one copy of the video has 75 million YouTube views.

The Trololo Guy was Russian singer Eduard Khil, whose rendition of the song “I Am Happy Because I’m Finally Returning Home” became a meme in 2010. Khil passed away in 2012.

“I put on my robe and wizard hat,” writes SuddenlyTimeWarp. Ohhh, that’s a classic.

It refers to an infamous troll called Bloodninja, who would get into cybersex sessions (ask your parents) on AOL Instant Messenger (also ask your parents), then suddenly ruin the mood by announcing things like “I put on my robe and wizard hat” or “I’m a rhinoceros.”

It only got weirder from there: 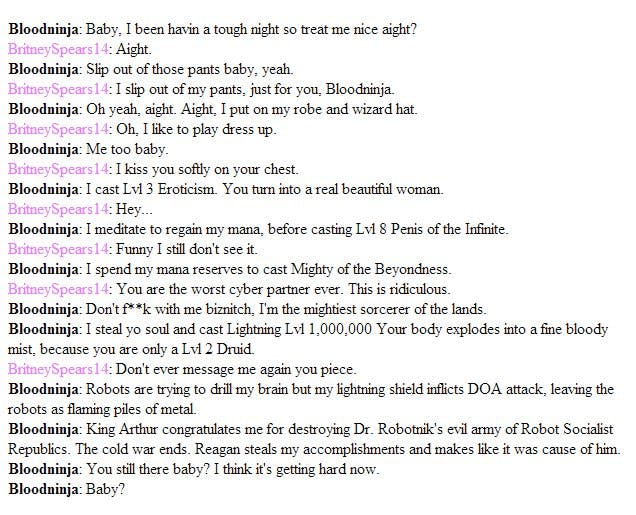 “Mah bucket,” suggests writingginger, referring to a series of images of a walrus (or “lolrus”) who is extremely devoted to his favorite bucket (or “bukkit”). A site called Walrus Bucket Saga has documented the entire history of the meme for posterity. 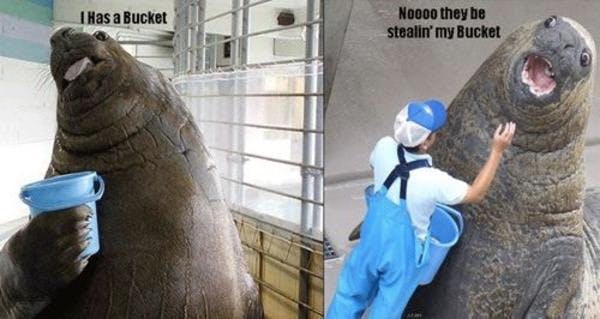 Wow, this really doesn’t make sense eight years later. I guess you had to be there?

Perhaps my favorite answer to “What dead meme do you miss the most?” comes from redditor conceptionary, who reminded everyone of “Has anyone really been far as decided to use even go want to do look more like?” and the canonical response, “You’ve got to be kidding me. I’ve been further even more decided to use even go need to do look more as anyone can. Can you really be far even as decided half as much to use go wish for that?”

This intentionally confusing copypasta was big in 2009, originating from 4chan and eventually making the jump to Reddit. Like most copypasta, it got old pretty quickly, but it had some additional staying power because of its call-and-response quality. Trying to parse the sentence was futile, but it was fun.

There are dozens more classic, now-dead memes in the r/AskReddit thread. Check it out and remember laughing, raging, and being annoyed online as the world wide web existed five to ten years ago. Today’s memes are certainly funnier and more complex, but they’re also standing on the shoulders of giants from a more innocent time when lolcats roamed the earth and all your base were belong to us.