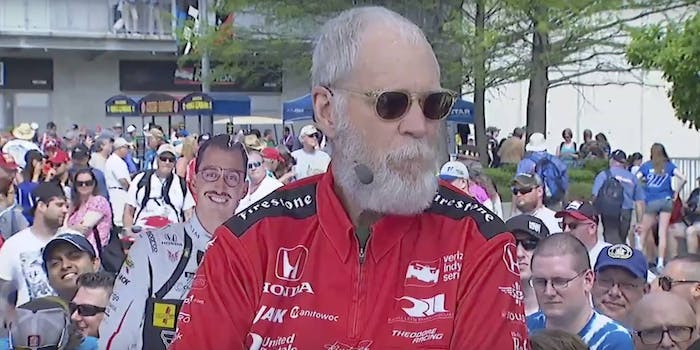 Rahal Letterman Lanigan Racing co-owner David Letterman has become a pretty serious dude since retiring from his Late Show hosting duties. He’s serious about chilling out, doing whatever he wants, and making sure his IndyCar team wins by any means necessary.

Letterman has been living it up in his hometown all weekend, preparing for the biggest race of the year by getting wasted as all get out. His Saturday morning appearance on SportsCenter included regaling fans with tales of the many Indy 500 races he’s attended, then ends with this bombshell of a reveal.

The only legitimately unexpected thing to come out of Letterman’s mouth was what he had to say about the outcome of the race. If Rahal Letterman Lanigan Racing doesn’t take that checkered flag, he’s faking his own death.

The Indy500 kicks off on Sunday afternoon and should last about three hours. Here’s hoping this isn’t the last we see of the former late night king.