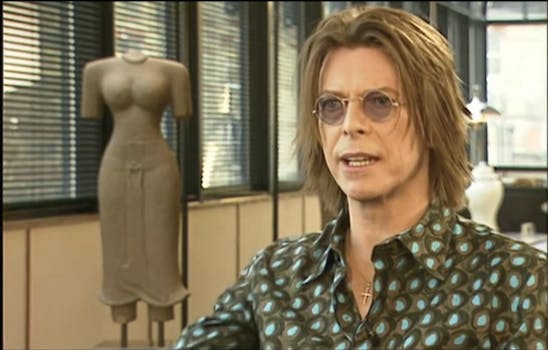 It is hard to remember just how differently we perceived the internet in 1999.

You can picture it, certainly. The infuriatingly slow dial-up connection, abstract grey and neon homepages, and chat rooms.

But it’s hard to remember how we interpreted it, with it 1) being such a novelty, and then 2) becoming the most pervasive force in all of human history.

Most of us, though, did not think it would fundamentally alter every interaction we have with this world.

That’s because most of us aren’t time-traveling aliens from other star systems who traipse across dimensions to engage with the world when and where they see fit.

But David Bowie was, and his BBC interview from 1999 shows it.

Just read what he has to say when interviewer Jeremy Paxman tries to dismiss Bowie’s grandiose discussion of the future of online content by saying, “but it’s just a tool.”

“No, it’s an alien life form. Is there life on Mars? Yes, it just landed here… I don’t think we’ve even seen the tip of the iceberg. I don’t think we’ve seen the potential of what the internet is going to do to society. Both good and bad is unimaginable. I think we are on the cusp of something exhilarating and terrifying.”

That is perhaps the truest prediction of the web anyone ever proffered, and Bowie made it when the internet was still in a nascent iteration.

The profundity really comes at the beginning of the interview, when Bowie talks about how it will alter the interaction between audience and artist, and what everyone will eventually believe.

He’s talking about rave culture, but it really reminds you of the way a certain 2016 U.S. presidential election went down.

“There is a breakdown, personified by the rave culture of the last few years, where the audience is at least as important as whoever is playing. It’s almost as like the artist is to accompany the audience and what the audience is doing. That feeling… has permeated the audience.”

“[Until] at least the mid-70s, we felt we were still living in the guise of a single, absolute-created society where there were known truths and known lies and there was no duplicity or pluralism about the things we believed in. That started to break down… and [now we have] the idea of a duality in the way we live, and there are always two, three, four, five sides to every story … the internet absolutely establishes and shows us that we are living in total fragmentation.”

If that’s not a speculation on how Donald Trump let his followers dictate his messaging and used dog-whistles and half-truths to rile up a constituency he wasn’t even a part of two years ago, as well as how Facebook refracts everyone’s world view back upon themselves, I don’t know what is.

Bowie also was spot-on in his assessment of how the internet would change consumption of news and art.

“I’m talking the actual context and the state of content is going to be so different to anything we can really envision at the moment. Where the interplay between the user and the provider will be so in simpatico. It’s going to crush our ideas of what mediums are all about.”